Vampires are People Too 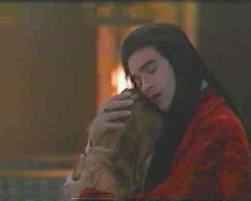 This post was inspired by 3 things:
1.) The ever present newbie-writer fear that "their IDEA will be STOLEN!"
2.) The incessant rants in the comments of nearly every blog post known to man insisting that their way is right.
3.) The argument that vampires are just a passing trend.

Vampires have been a part of myth and legend around the world probably since the beginning of time. But in 1819, when Dr. John Polidori published his short story, THE VAMPYRE, they have become a common fixture in popular fiction. Their mass appeal may wax and wane, but they shall always be around.

What is so wonderful about today is that there's an endless plethora of different vampires, ranging from hella-scary to hella-romantic. Last month, debut author, Rebecca Zanetti did this awesome post on how she made her vampires unique in this crowded market.

In her novel, FATED, (If you haven't bought it yet, DO IT NOW!) her vampires are a separate species that are born, not made. JR Ward is of the same school. But Zanetti's vampires are only male so they have to mate with human females to reproduce. Kinda like David Eddings's all female Dryads.

Already that is way different from the vampires in my novels. Mine begin as humans and are made into vampires of both genders. The transformation makes them sterile, so no babies, although they are perfectly capable of intimacy. :)

Culturally, Zanetti's vampires are very alpha and very militant with secret hideouts, superior technology, and a staff of scientists.

Ward's vampires come in 3 different classes: Civilians, which are much like average humans. The Aristocrats, which are stiff and spoiled and kinda weak, and The Warriors, which are way Alpha, mercenary and the protectors of the entire race.

My vampires are a cross between feudalistic and bureaucratic. Each city is ruled by a Lord Vampire and the Lords are governed by a council of Elders. Between the two, laws and policies are organized by lawyers and circulated by messengers and paper-pushers. Some Lords (male and female) are very alpha and some are kindly and diplomatic. Some are bat-sh*t crazy.

Besides all that, there are multitudes of variations. Like people, vampire characters are endlessly unique. There is no RIGHT way to do them and we all have our favorites. And even if every author followed the same definitions and traits of what a vampire is, you would still have different stories because we authors are all different people.