Remember back in May when I posted about my 3 Book Deal with Borough's Publishing for my heavy metal romance series? Well, book ONE already has a cover, a new title, and a RELEASE DATE!

I joyfully present to you all, KISSING VICIOUS! 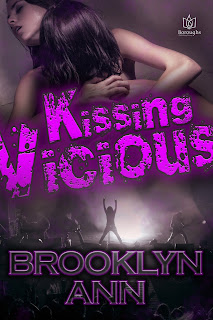 Kinley Black's dream comes true when an interview with her favorite band turns into an opportunity to become a roadie. She is determined to out-man the rest of the road crew who scorn her presence. But it's hard to be manly when the sight of the lead singer strikes chords of desire within her.

Quinn Mayne, lead singer of Vishӧus, is furious when the road manager hires a woman to haul their gear. Taking such a beauty on the road is like dangling meat over a pack of feral hounds. However, threat of a discrimination lawsuit leaves him no choice. Despite his reluctance, he can't help being impressed by his new roadie's determination any more than he can suppress his urge to protect her... or his craving for her lush lips.

Combating the advances and animosity of her coworkers, Kinley's talent and skill earns the band's regard... and more heated glances from Quinn. When she is promoted to guitar tech, one roadie's resentment grows until he goes to deadly lengths to stop her. As her foray into the male dominated world of heavy metal deepens, Kinley learns that she has to do more than protect her heart, she has to protect her life.

I'll post pre-order links as soon as they're up!

Posted by Brooklyn Ann at 8:36 PM No comments:

Hey everyone, my fellow RWA chapter buddy has an amazing book coming out in November and she gave me permission to spread the word! 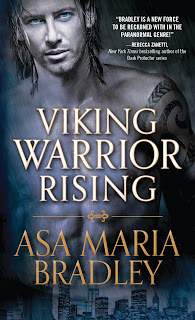 Immortal Vikings are among us.
Leif Skarsganger and his elite band of immortal warriors have been charged to protect humanity from the evil Norse god Loki.
Under attack from Loki’s minions, Leif is shocked to encounter a dark-haired beauty who fights like a warrior herself. Wounded and feverish, the Viking kisses her, inadvertently triggering an ancient Norse bond. But when Naya Brisbane breaks away and disappears before the bond is completed, Leif’s warrior spirit goes berserk. If Leif doesn’t find her fast, he’s going to lose himself to permanent battle fury.
But Naya doesn’t want to be found...and he’ll do anything to find her. Because they’re both running out of time.


"Asa Maria Bradley creates a swoon-worthy hero who sizzles across the pages in this tale full of passion, blood, and destiny! Sexy, stubborn, and smart lovers clash in a tension-filled race to outwit science and control fate. Bradley is a new force to be reckoned with in the paranormal genre! Move over Highlanders...the Vikings are coming!"
- Rebecca Zanetti, New York Times and USA Today bestselling author of the Dark Protector series


"Strong world-building, and a hero that will make you want a Viking of your very own!"
- Paige Tyler, New York Times and USA Today bestselling author of the X-Ops and SWAT series


"An intensely thrilling and unique romance that whisks the reader into the intricate, smart, and sexy world of these wickedly hot Viking warriors."
- Sara Humphreys, award-winning author of Vampires Never Cry Wolf


Add to Goodreads List or pre-order from: Barnes & Noble or Amazon 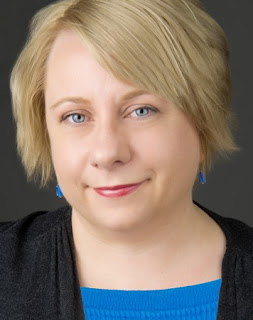 About the AuthorAsa Maria Bradley grew up in Sweden surrounded by archaeology and history steeped in Norse mythology, which inspired the immortal Vikings and Valkyries in her paranormal romances. She also writes romantic suspense and currently resides on a lake deep in the pine forests of the Pacific Northwest with a British husband and a rescue dog of indeterminate breed. Asa graduated from the Inland Northwest Center for Writers MFA program at Eastern Washington University with an MFA in creative writing and also holds a Master of Science in Medical Physics from University of Colorado. She’s a 2014 Golden Heart finalist and represented by Sarah E Younger at the Nancy Yost Literary Agency.

So my short story, TESEMINI is finally available! And it's free!

Tesemini focused on the band, Rage of Angels before the events of WRENCHING FATE take place.


Aspiring heavy metal band, Rage of Angels, have found a perfect place to practice their music: an abandoned church in Spirit Lake, Idaho.

But once they set up their gear on the vacant altar, a barrage of eerie occurrences threaten to drive the band out of their new sanctuary.

When they discover that the church is haunted by enraged ghosts of the Kootenai Indian tribe, they utilize the advice of a voodoo priestess to confront the angry spirits.

And here's the cover! 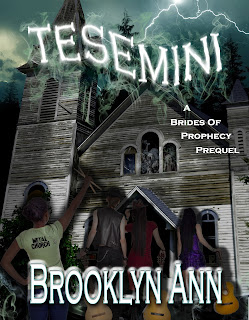 Although it's a ghost story, it's more funny than scary. :D

I came up with the concept of the story when I encountered a creepy abandoned church in the town of Spirit Lake, Idaho. (And yes, that's the actual church on the cover. Photograph by the amazing Kent Butler).

It looked like the perfect place for my fictional garage band without a garage.

I then researched the local ghost stories of the town, and was inspired by the haunting legends.

It was a lot of fun and I hope you'll pick it up!

Here are the links:

Posted by Brooklyn Ann at 10:18 PM No comments: