It's that time again, where I review my triumphs and tribulations of the year. I started out by reading the 2017 Goals I'd posted back in January. Oh man, that was a mistake. I only accomplished 2 1/2 out of 7 things on the list: Doing nice things for my boyfriend, spending more time with my son (but not as much as I should have) and quitting the day job. The last was HUGE, though!

Did I quit smoking? Fail.
Write 30K a month? FAIL.
Get my Datsun back on the road? Fail.
Come up with a marketing plan and schedule and implement it? FAIL.

However, when I did the next thing in my recap process: going through my FB feed month by month, I still had a lot of good stuff there. And I DID get all my planned books done, even if I was on the edge of my deadline every time.

I finished my 13th novel.

Wynter's Bite was such a fun book to write and make teasers for.

Rock God made the Top 20 books of 2016 over at Behind ClosedDoors Book Reviews!

I ended up on an Australian Heavy Metal Site! http://www.hotmetalonline.com/2017/02/01/hearts-of-metal-yes-metal-romance-novels-2017/

It was such an amazing experience! An Australian heavy metal journalist discovered my books and loved them! We even chatted on Skype and she's eventually going to interview me!

I did make an Author Media Kit, so there was some marketing.

I quit the day job!

After being trapped at a call center for three and a half years, it was so liberating to escape. I'm still not making enough from my books to be self-supporting, but I got an AMAZING stay at home job that allows me to go further with the writing.

Made Swag and did Graphics

It was a blast meeting new readers and fellow authors. 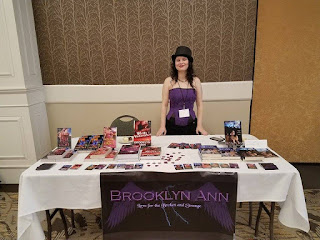 Got an airbrush kit… but didn’t do much

I still need to figure out straight lines.

He had cancer on his ear. It was benign, but the surgery and recovery was still painful for him.

My uncle passed away.
RIP, David. You were so much fun and I'm glad I got to spend time with you. 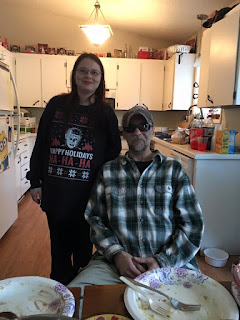 RT is the biggest con of the year, so there was a lot involved. 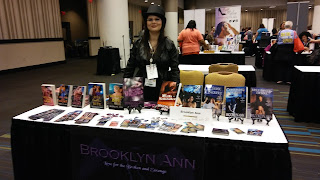 Kent and I had a wonderful time in Atlanta! I have so many pics from that fun time. And oh my goodness, the food was incredible! 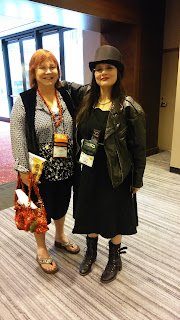 We both got con crud after. Then, when I finally recovered, I sprained my ankle and had to hobble around with a can for a freaking week.

Despite this, I finished my 14th novel, Pleading Rapture.

Got to see HellYeah

It turns out that my boyfriend's old friend and former bandmate is now the guitarist of the band, HellYeah. He's super cool, we hung out with him in Vegas two years ago and this time he came up to Coeur d'Alene and hung out with us and ate elk steaks before he played a show in Spokane. He also gave me some useful research info for my Hearts of Metal series. 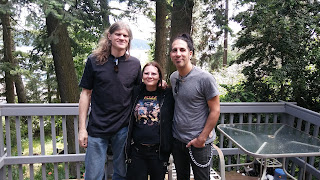 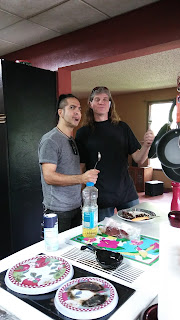 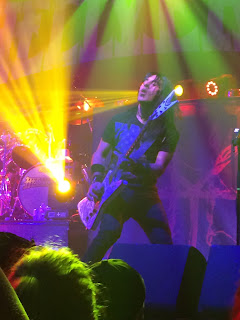 Book 5 in my Brides of Prophecy series was one hell of a ride. Literally. I finally got to write an epic road chase scene that had been in my mind for years. 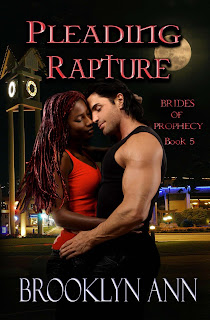 You can get it HERE!

Yes, that's an event, damn it. I have fond memories.
...I got drunk off of two of them and amused everyone on Facebook. 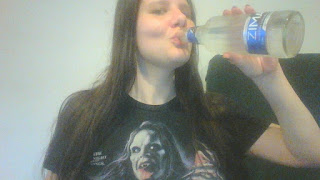 This provided a huge boost in my writing productivity. Sadly, it got too hot by July. I should have started doing it sooner. 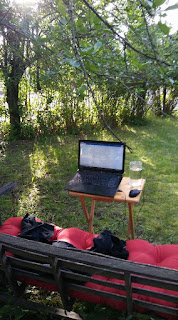 I finished a scratchboard that a friend commissioned me to do:
The creepy church in Spirit Lake that was featured in my short story, Tesemini. 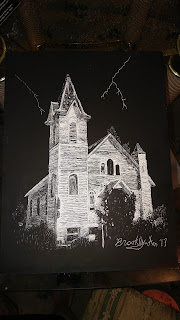 Signed another 3 book contract with Boroughs
More Hearts of Metal books are on the horizon! 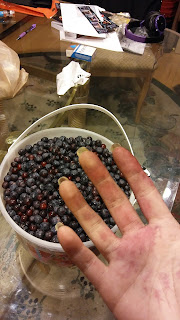 Got distracted by Twin Peaks

Oh man, that show has me obsessed... And my best friend was an extra in the diner scene! She's in the purple turtleneck and white vest.

And I made a lot of memes and stuff. 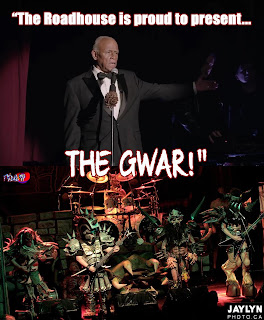 My son started Driver’s Ed.
My child, behind the wheel of my car. The horror!

Turned 35
We won't talk about that.

Went to Reno
We went to visit Kent's family, but also RT 2018 will be in Reno, so I got to scope out the venue! I made a video.

Battled hackers
My website got attacked bad. Thankfully, my boyfriend's an IT Guy and saved the day.

And we got pretty close seats. 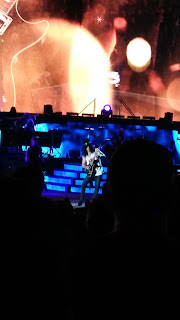 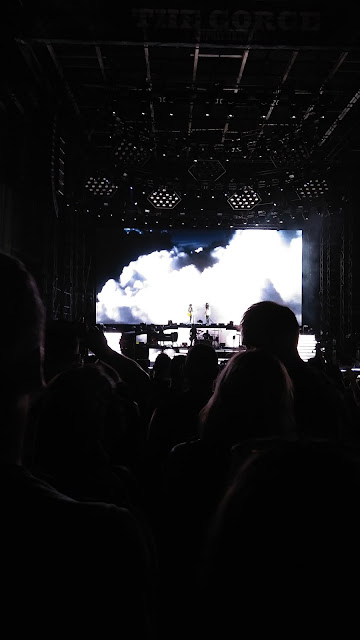 But then we came home to the whole northwest on fire and I caught the flu. :( 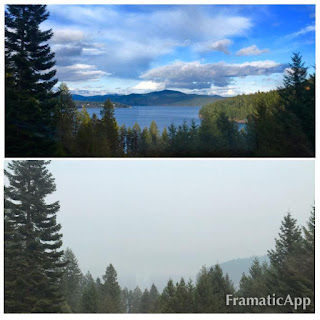 I ate Pumpkin Spice everything and started on mass prep for Halloween.

I saw IT.
This was a big deal because IT is my favorite novel of all time.

I saw Megadeth and the Scorpions.

Megadeth is my favorite band of all time and I cried when they did "Holy Wars." 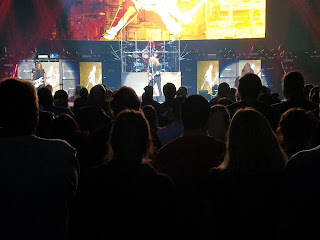 The Scorpions are hella fun and they had a giant disco ball! 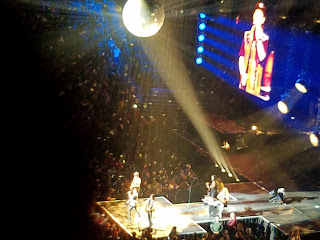 I got back into writing and also prepped for Halloween. I carved some cool pumpkins. 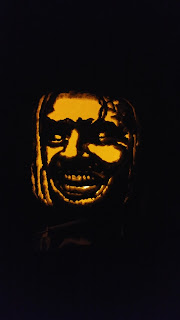 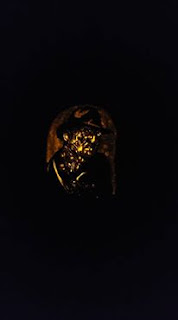 I watched a ton of movies with Halloween Horror club and worked on revisions for Forbidden Song.

For Halloween, I dressed as Queen Elizabeth the First, and my son was a plague doctor. We decorated the yard pretty badass. 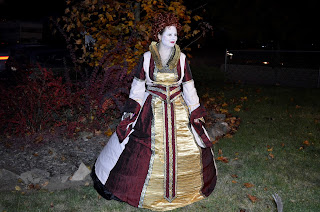 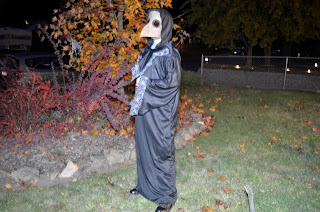 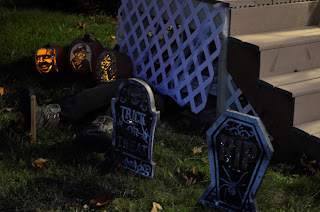 I wrote like a fiend and Finished my 16th novel!

Then it was Thanksgiving.

I was all about the turkey. 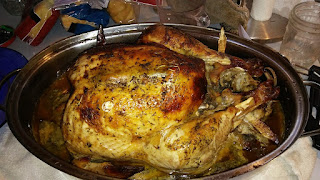 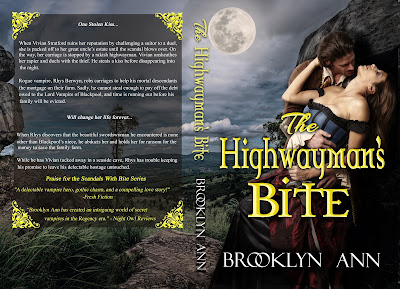 You can read the first chapter HERE!

I got health insurance!

More on that with my 2018 goals post, which you can see here.

Aside from line edits for Forbidden Song, I spent this month recharging with books and movies. Reading for pleasure has been something lost to me for too long.

So, it really wasn't as bad a year for me as I'd thought. I feel like I lived more. I'll go more into my analysis of my successes and failures for next post, when I talk about my goals.

Posted by Brooklyn Ann at 5:06 PM No comments: