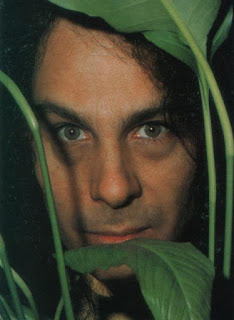 I've always been inspired by music, but I didn't pay much attention to the people who made it until I studied heavy metal for my urban fantasy series, in which some main players are in a band. Although he'd been around for decades, I didn't become aware of Ronnie James Dio until my former husband introduced me to his music. Right away I was captivated by his powerful voice and entrancing themes. We planned on seeing him in concert when we heard the news exactly one year ago that he had died from stomach cancer. Celebrity deaths usually don't affect me, but this one made me cry...a lot. The world lost an amazing person, but I didn't realize just how amazing Dio was until I began my research. 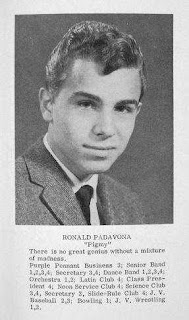 Ronald James Padavona turned down a scholarship to Juilliard (because he wanted to rock) and  joined a band called THE VEGAS KINGS, at first playing the trumpet and singing backup.
The band changed its name to RONNIE AND THE REDCAPS when he took over as lead singer. One of the first singles was: "An Angel is Missing"


1960's:  Being that shortening one's name was popular back then, Ronnie changed his last name to "Dio" after an Italian mafia boss (NOT after the Italian word for "God" as many claim) & the band to RONNIE DIO AND THE PROPHETS. They did the best cover of "Love Potion #9 EVER!!!!


As bands like Led Zepplin and  Blue Oyster Cult came on the scene, the only thing to do was rock harder. The Prophets disbanded in 1967 and Dio & the guitarist formed the band, THE ELECTRIC ELVES, shortened it to THE ELVES, and finally to ELF.

They started out touring clubs and doing covers (Ironically they did a few Black Sabbath songs) while they built up their own repertoire and they gained fame when they became the opening act for DEEP PURPLE.


1970's:  DEEP PURPLE guitarist, Ritchie Blackmore had a falling out with the band and decided to form his own. Well aware of Dio's talent, he convinced Ronnie to join him in forming the band RAINBOW (allegedly he had to get him drunk). Dio agreed, on the condition that he also take the rest of the members of ELF. 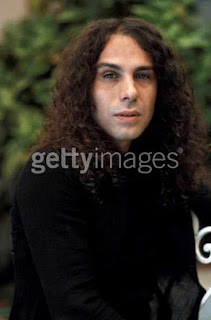 With Ritchie's guitar genius and Dio's powerful vocals as well as their shared interest in Medieval history, RAINBOW was an explosion of awesome.


Here's the song "Mistreated." Eat your heart out, American Idol

And here's Stargazer AKA mind-exploding glory. 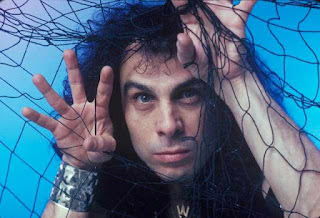 1980's:   Eventually, Blackmore and Dio had a fallout. Ritchie wanted to move more towards pop music and love songs and Dio wanted to keep the mystical themes and heavy style, so Ronnie left RAINBOW (which sucked without him).

Coincidentally, Ozzy had just left Black Sabbath, so they needed a singer. Black Sabbath was a perfect spot for Dio and he revitalized the band with his inspiring lyrics, dedication, and refreshingly drug free lifestyle.

Due to a misunderstanding caused by a drunken sound technician, Dio only remained with Sabbath for 2 1/2 albums before taking off with the drummer to form his own band, DIO.

He was most famous for the songs "Holy Diver" and "Rainbow in the Dark" but this one's a major favorite of mine.


The 80's were Dio's shining time and in between tons of incredible albums and endless touring he also somehow made time to organize various charity projects and participate in the "Rock against Drugs" campaign. 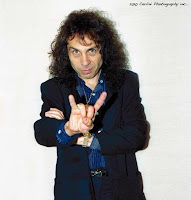 Due to the "Grunge" movement and the general increase of violence and political unrest in the world, Dio's music briefly got a little cynical. "Strange Highways" is not such a popular album but the title song really spoke to me.


He also reunited with Black Sabbath long enough to record another album, but again miscommunication broke them up. Later, Sabbath had a brief reunion with Ozzy, which I was fortunate to see, though I would have preferred Dio. 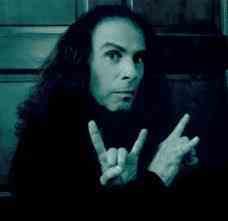 
Here's the song "Losing My Insanity" from the album, MAGICA

He then again reunited with Black Sabbath under the name HEAVEN AND HELL presumably to avoid drama with Ozzy. :)

The band had a successful tour until they had to shut it down when Dio was diagnosed with stomach cancer. :::Sob:: At first treatment seemed to be working, but then he passed away on May 16th, 2010 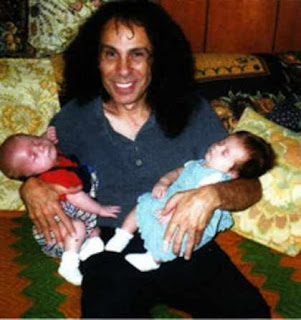 Great Works: Besides making music that continues to inspire each generation, Ronnie James Dio participated in many charity projects: The first is CHILDREN OF THE NIGHT, a program designed to get runaways off the streets and save them from prostitution. A portion of proceeds from album sales still goes to it. Another was the infamous HEARING AID project in which he gathered countless musicians from the Metal world to raise over 1 million dollars for Africa. Dio also participated in animal rescue programs.

So when people call this guy "evil" or "Satanic," naturally I get pissed.

Dio's family set up the STAND UP AND SHOUT CANCER FUND, dedicated to providing low-income and uninsured people with cancer screenings. More info can be found on the official Dio Website.

I know this is a long post, but still it's not enough to cover the magnificence of Dio. Rest in peace, Dio, and I hope you are still rocking wherever you are.  If you want to learn more about this incredible person, there's a ton of interviews on YouTube, as well as a tour of his gorgeous house.

To quote the movie, THE SANDLOT, "Heroes get remembered, but Legends never die." 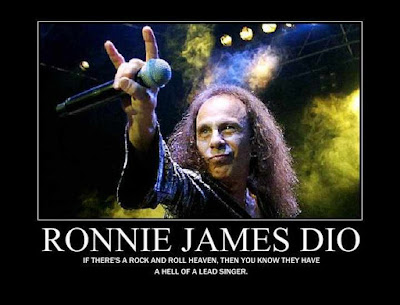 ant to repopulate the world with groupies -- and that’s not wham a thinking man. I’d like to be known f I want to be known for being a rock and roll animal. I live within that scope, but not nearly like others.