I met Rebecca Zanetti on twitter as a fellow paranormal romance author. I didn't realize she lived in my town until I saw her on the front page of the newspaper and read the story announcing her deal with Kensington. So I was beyond pleased to not only attend her release party on Tuesday and pick up a signed copy of FATED, but to also get to feature her on my blog.


Since we both write vampire romance, I asked her to give her perspective on how she made hers stand out in this beloved, but crowded market.

When Brooklyn Ann asked me to blog about vampires and world building in this crowded market, I thought it was a great topic.  As a writer, it’s a lot of fun to create something new, or something with a different angle.  In doing this, I’d advise you to “remember the why.”  If your world is different than the norm, there has to be a reason for it.  Keep in mind that world-building is important, but don’t spend all your energy with that.
What sells a book is the characters, vampire or not.
Lately I’ve asked people who’ve read my books about their favorite scenes, assuming (incorrectly it turns out), that they’ll choose my favorite scenes.  The scenes most often chosen are those that dig deep between the characters, either in a heartwarming or downright sexy way.  The fact that the hero is a vampire usually doesn’t come into play.  (Except his vampireness makes him dark and dangerous…all the more sexy.)
Having said that, hey, if you’re writing about vamps, what does make them stand out?  Mine in FATED are a species on earth, born and not made.  You’re either a vampire or not, and there’s no turning into one.
Incidentally, vampires in FATED’s world are only male.  Now, science comes into play in the book, so I had to go into a bit of genetics with how this happened.  Easy enough and necessary.  So it isn’t really enough just to say…hey, my vamps are only male.  You have to explain why.  Remember the why.  Readers want to know.  For me, science was the easiest way to explain and took only a few sentences through some dialogue with the heroine.  If you met a vampire and he told you they were only male, wouldn’t you ask why?
Of course, the fact that vampires are only male makes it necessary for them to mate with human females.
How convenient! 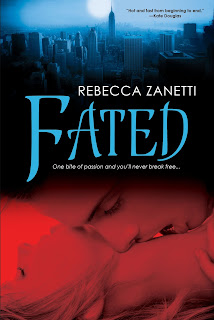 I really appreciate Brooklyn Ann having me on her blog today!  Since my amazing editor sent me some promo copies of FATED, why don’t we give one out to a commenter?  Please leave a comment for a chance to win.  You can comment on whether or not you believe in fate…if you like romances, or whatever’s on your mind today.  Can’t wait to read!


Thanks so much for stopping by today, Rebecca! Readers: I'll draw a random winner on Monday!
Posted by Brooklyn Ann at 9:00 AM