On Quoting Song Lyrics in Your Novel (Part 1)

So I'm working on my 3rd Brides of Prophecy novel and it's the point where we get deeper into some of the said Prophecy. It's also where the series veers from Urban Fantasy to straight fantasy, but I'll get into that more another time.

For now, onto the music.

I actually wrote Xochitl's story back in 2001. It SUCKED so bad that I'm glad my old computer died and I was only able to get some of the book off my floppy discs. Yes, you heard me, floppy discs. I was even more poor back then.

However there was a part about it that I liked. Xochitl is the lead singer of a famous metal band. The band had formed back when they were in high school. They learned how to perform an epic rock song so well that their peers finally started taking them seriously and later it helps them get their start in the business.

That song ended up cementing their bond in the end as well as accomplishing something VERY important that I can't say because spoilers.

In my ancient crap draft the song was "November Rain" by Guns & Roses. Which is a great song, don't get me wrong but REALLY would have been a terrible idea in the book.

Sometime around 2005, I heard a song (much older than "November Rain") that gave me chills and accelerated by pulse like no other. The vocals, the instrumental, the LYRICS! For about the 1st 20 listens, I just reveled in the beauty of the song. But as I listened to the words, something eerily familiar about it. OMG, it's a lot like that one part of Xochitl's book! And I could totally imagine Xochitl singing it.

THIS IS THEIR SONG, I decided, and went back to turning wrenches and working on Book 1.

Now that I'm working on book 3 I've learned enough about the world to know that I need permission to use copyrighted song lyrics in my novel. At first I thought I would need to contact the writer of the song's lyrics or his manager/ agent. Since he is deceased, then it would be his widow/ manager/ agent which I'd thought would be easy since she's the same person. I was wrong. There is no contact info to be found.

Thankfully they got back to me right away and directed me to ANOTHER record company... who didn't have the song, then I got directed to ANOTHER, which directed me to BMI, which I should have checked in the first place.


Still, one thing was troubling. You can "Buy" the rights to songs from BMI and major music sites like Warner, Universal, and Sony, but they only sell rights to play or perform the actual song, which doesn't work because A.) you can't print sound and B.) FICTIONAL people will be performing it. They don't offer anything on just the lyrics.

....Which I would have known if I'd read Literary Agent, Virginia Lloyd's Blog Post.

Not only does it tell you about sites like BMI to see who owns the publishing rights to a song, it tells you how to ask to use them. I emailed the publisher pretty much asking how to ask BEFORE I stumbled upon Virginia's post.

Luckily, they were gracious about my lack of experience with this scenario and outlined their requirements EXACTLY like Virginia said.

Here was what they asked for:

After supplying that info, they said they'd provide me with a quote... which I may or may not be able to afford. From further research, the price could be anywhere between 50 and 2000 bucks.

Also, I did not have concrete answers for some of those questions because A.) the book isn't finished yet. I figured I'd check on permissions first so I know how important a role that song is allowed to play in the story. B.) I really don't yet know what a reasonable term to ask for is. I know you have to renew the permission (with more money) when it runs out, so I asked for more clarification.
C.) I just put the territories that my books seem to be selling most in.
D.) This is my Indie series, so I don't have a print run. My Indie series is just getting off the ground, so I went for only 1000 copies with option to renew once I get close to selling that amount.

I highly doubt I'll hear back from them as quickly but cross your fingers for me that they won't quote a price outside of my range.

I'll also keep you all posted on what happens next.

Posted by Brooklyn Ann at 8:14 PM No comments:

Sorry I've been absent. I had the misfortune of getting the worst cold ever for the entire week of Halloween. I'm barely now able to breathe.

Still, that didn't stop me from doing my damnedest to enjoy my favorite holiday.

Here's a few that I was able to watch:

I definitely want to do that again next year!

I also had a ton of fun carving my pumpkin. I spent 8 hours creating Freddy Krueger from Nightmare on Elm Street. Then I roasted pumpkin seeds in butter and Johnny's Seasoning Salt. 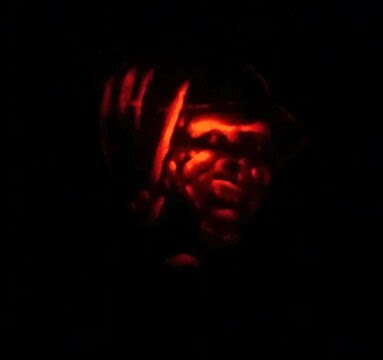 I read some spooky Horror novels, including Shirley Jackson's THE HAUNTING OF HILL HOUSE and Peter Straub's GHOST STORY.

For the big day, heavily doped up on nyquil, I went to my local pub for a costume party and karaoke. My singing was worse than usual with the cold, but I still had a lot of fun.

What did you do for your Halloween?

Posted by Brooklyn Ann at 2:35 PM No comments: