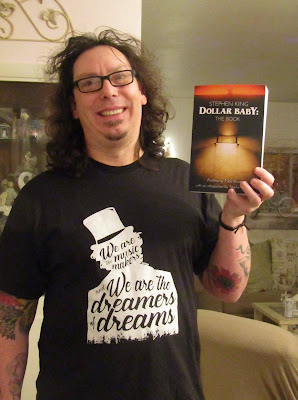 Film reviewer, author, and film festival host, Anthony Northrup, has been an online buddy of mine ever since I joined the “All Things King” group on Facebook. Over the years, we’ve gotten to know each other’s works. And he’s interviewed me a couple times and reviewed my books. When he put together a book about both Stephen King’s “Dollar Baby” films, (Short films that independent filmmakers are allowed to make as long as they are not for sale or distributed anywhere. King sells the rights to these for a dollar and calls them his “Dollar Babies”) and essays from authors and filmmakers about how Stephen King has influenced their work. I was honored to contribute an essay for Stephen King Dollar Baby: The Book.

Anyway, it’s about time I interviewed him, so here we go:

Great question Brooklyn Ann.  It was pretty simple. I’ve had a passion my entire life for films, and as you know, pre Covid 19, I was like a fixture at the theater. Where I live there are a couple of local newspapers. I happened to know the owner of one of these papers and asked him if he had a movie review column. He said no.  We worked out a great deal and that got the ball rolling. This happened ten years ago now, and this coming May marks my tenth anniversary writing for the Tri County Sun, which now also shares my film reviews (and celebrity interviews) in another newspaper in our area as well.  So now I reach even a broader base of readers.

When did you become aware of Stephen King’s “Dollar Baby” films? How did you get your first opportunity to see one?

The first time I ever heard of a Dollar Baby film was when I was reading the monstrosity-sized book, STEPHEN KING ENCYCLOPEDIA by Stephen Spignesi.  When I read this book, I asked myself  What’s a “dollar baby”? Not too long after that, in 2013, as I was on social media, I came across director Billy Hanson,  he was talking about his Dollar Baby film, SURVIVOR TYPE,based on Stephen King’s short story from the book, SKELETON CREW. I introduced myself to Billy, and asked if I could interview him and review his film. He said yes. Afterwards, he was so impressed with the article, he introduced me to other Dollar Baby filmmakers and the ball began rolling from there.

I read that you had lots of opportunities to meet people, network, and attend film festivals back when you lived in the Hollywood area, and when you lived in South Carolina, where many King adaptations were being filmed. But then you ended up in North Dakota. As a fellow resident of a rural state (Idaho), I am curious how you adapted the situation to be able to keep in contact with your friends and connections, attend film festivals, and keep up with the convention circuit.

Well, this is a lengthy question. You have all the correct places I’ve lived, however, not in the correct order.  I do live currently in North Dakota, for the past 19 years. Previously I lived in Southern California, in the San Fernando Valley (for 10 years). Before that I lived between North and South Carolina, and California as a kid, and teenager. I was actually born in  Riverhead, New York, and resided there until I was five years old. Now that we’ve got the timeline straight of where I’ve lived, I can answer your initial question of how I was able to network. When I was an adult living in Southern California, I lived in Studio City, and Sherman Oaks, which is considered the Valley (San Fernando).  These two cities border one another and Ventura Boulevard runs along the perimeter of both. While I was in Southern California I met several celebrities, which include, directors, actors, and writers. They came into a well known and frequented retail store I worked in. This made it easy for me to interact with many of the people that I’ve built contacts with in the early 1990’s, and although I don’t reside in So-Cal now I have kept in contact with many of these people who have become personal friends.  This has been a basis for me to be able to have the opportunity to review, and interview quite a few of those people I met well over 20 years ago. As far as the film fests that I have held in the past 7 years, they have all been in Minneapolis MN, at Crypticon Horror Convention. One thing I can say regarding living in the Carolinas, as a child the film SILVER BULLET was filmed in Burgaw, NC, that is also where I lived. There were several other Stephen King films such as MAXIMUM OVERDRIVE, CAT’S EYE, and FIRESTARTER, which I believe were a basis for my life long love of movies, most particularly Stephen King.

I LOVED Silver Bullet! It had to have been exciting being around where it was filmed. Now for my next question: When you decided to compile your interviews with Dollar Baby filmmakers, and turn it into a book that also included interviews and essays from other writers and figures in the Stephen King fandom, what was your greatest challenge in undertaking this massive project?

Ohhh, there were a lot of challenges. However, the biggest would have to be contacting and setting up interviews and reviews with the Dollar Baby directors themselves.  After reading Stephen Spignesi’s book, STEPHEN KING ENCYCLOPEDIA, I initially found out about the Dollar Baby program. That was new for me, and it piqued my interest. While I was on a social media network one day, director Billy Hanson made a comment on one of my friend’s posts about his newly released film, SURVIVOR TYPE.  Of course, I couldn’t let this pass, so I reached out to Billy and was really happy he responded to me. From there things began to happen, and he was my first Dollar Baby short film viewing and review, followed by an exclusive interview with him. He was pleased with what I did and from there things started to snowball. Through his networking others in the Dollar Baby program actually began reaching out to me asking where they could send their film for review, and an interview with them. Mind you, this is an exclusive program so none of these films are currently released to the public to view except through film festivals.

I love that you’re a metalhead like me. Who are some of your favorite metal bands?

Although I am a lover of many genres of music, yes, I am a metalhead. However, my taste runs along the line of AC-DC (who is my true passion), and have seen them in concert in the 90’s. I’ve also seen Guns N’ Roses, Metallica, Motley Crue, Skid Row, Van Halen, and several others. Of course, I love Ozzy (who was truly, back in the day), considered one of the first metal gods while with Black Sabbath.

Other than the King, who are some of your favorite authors?

You have a very busy life, managing the All Things King group on FB, interviewing authors and filmmakers, doing reviews and articles for the Tri-County Sun, as well as working on your burgeoning career as an author in your own right. How do you manage your time to keep up with it all?

*laugh* There isn’t enough time in the day!  It really is a full-time job with all I have to cover, but I squeeze in everything whenever I have free time or I have to simply make time. However, downtime is few and far between. I also work a 9 to 5. You know, a starving artist, haha!

What has been the best thing about being part of the Stephen King fandom?

I think it boils down to three things: (1) fellow Stephen King fans.  Running a Stephen King fan page on social media for 9 years, I have met some absolutely wonderful and amazing people all over the world.  We all come together to talk about Stephen King, something we all have in common. To visit with fans and talk and feel the same excitement and passion that I share is a wonderful experience.  (2) Studying Stephen King’s works is something die hard fans do. Not just reading his books or watching his films, but actually breaking his stories down, analyzing them is fun, yet an educational way of enjoying King's works. (3) Collecting.  Some fans are happy with just buying the books or dvd’s, but some fans have (or need) to own EVERYTHING King, from T-shirts to buttons, to rare collectibles, to action figures.  The bigger the collection, the prouder fans.


Finally, a fun question about North Dakota food. I’m now hopelessly addicted to Dots Pretzels (anyone reading this interview should fill out a request form at their local grocery store to get this addictive snack!). Are there any other awesome foods from your region?

Glad you like the Dots Pretzels. To answer your question, the food in the north eastern part of North Dakota where I live is mainly Norwegian, and bland. We are pretty particular eaters being that some of the best Mexican food you can get is in Southern California, so that isn’t something we can find here that tastes authentic. To tell you the truth North Dakota is a huge agricultural state, so it’s pretty much a meat & potatoes kind of place. My wife is an excellent cook and is very diverse (Greek food, Italian food, gourmet foods, etc.), but we do sometimes like to get the deep fried pickles and the chocolate covered potato chips as a fun North Dakota snack.
To wrap it up, it’s kind of fun on the receiving end of an interview. I really liked the questions you asked and I hope your readers will enjoy them and my answers as well.  Thank you, Brooklyn Ann.
If any of your readers are interested, or diverse Stephen King fans, they can look for my book at Bear Manor Media.com  or Amazon.com under the title:  STEPHEN KING DOLLAR BABY: The Book by Anthony Northrup.

If you want to see some Dollar Baby Films, on April 23-25th, there is going to be a 3-day virtual film festival hosted by Barker Street Cinema with Q&As from Anthony Northrup and several of the film directors. Details are HERE.

Posted by Brooklyn Ann at 3:28 PM No comments: