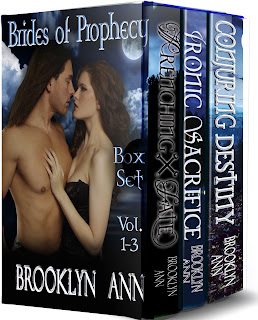 Hey everyone! My Brides of Prophecy Box set is on Bookbub for 99 cents! That's the first three books for less than a dollar!

And now that I've gotten a Bookbub, that means it might be easier for me to get another one. So be sure to follow me there to get updates!

That's all the news I have for now, but there will be a quilting update forthcoming!

Posted by Brooklyn Ann at 10:04 AM No comments:

It's here! Unleashing Desire is finally here! I've been anxious to bring this particular book out into the world because it resolves two plot threads from both books one and two in the Brides of Prophecy series. Though if I were to recommend which book to read before this one, it would be book two, IRONIC SACRIFICE, which you can get Free by signing up for my newsletter!


However, book one, WRENCHING FATE is only 99 cents, so why not snag both!


Now I used to just post Amazon links, but thanks to Draft2Digital's Books2Read program, I now have a link where you can get the book from the e-tailer that YOU prefer! So go get Unleashing Desire HERE!


Also, I'm celebrating this release with a Facebook party today with tons of guest authors and lots of giveaways. Come here to join in on the fun!


A setup so perfect… it might just be fate.

Radu Nicolae has spent centuries in a guilt-induced hibernation beneath the ruins of his family castle. The only time he awakens is to feast on the occasional vampire hunter. When Lillian Holmes invades his lair, trying to kill him for a crime he did not commit, he decides it is time to rejoin the world. As he feeds on the inept, but delectable hunter and sees her memories, he realizes that he is being used as a weapon to murder her. Radu does not like being used.
Agent Lillian Holmes, of the Abnormal Investigation Unit, is sent on a mission to kill the vampire who murdered her father. But when she tries to stake Radu, he awakens. When his fangs sink into her throat, she thinks she’s a goner. To her surprise, she wakes up a prisoner. Furthermore, Radu did not kill her father. The AIU killed Joe Holmes and sent Lillian to Radu to die.

Together, they strike a bargain: Lillian will help Radu travel to the United States to reunite with his long lost twin brother. In return, he will help her take down the men who killed her father. As their relationship deepens on their journey, so does the danger. Not only must they keep government agents from finding out that Lillian is alive, but she also has a secret that will rock the foundations of the vampire world.
Posted by Brooklyn Ann at 12:23 PM No comments:

Hey everyone! It looks like the paperback of UNLEASHING DESIRE is available now on Amazon!


And oh looky! It's also available a day early on Google Play!


I am absolutely humbled by the enthusiasm I've received about this book. In thanks, here's a bonus excerpt!

Unleashing Desire comes out in 7 days and other news! 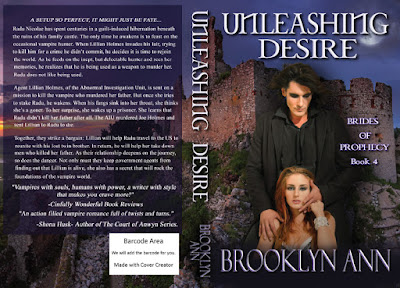 My hands are sweating, just like they do before every release. Will you guys like this one? Will this book help or harm my career? So many silly worries plague an author when a release is imminent.

Mostly though, I'm excited. This might be my favorite cover of the series, and early reviewers love it.

I'm also excited for you to read the story. In this book, Razvan and Radu, twin vampires separated for seven hundred years, finally reunite. Also, a certain plot thread left open in book one, Wrenching Fate is finally resolved. I've been sitting on this secret for over two years (6, if you count when I started writing the series) and I finally get to reveal it!

So be sure to Preorder UNLEASHING DESIRE !

Also, I'm having an awesome release party on Facebook on the 16th. Go here to join in the fun!

In other news, my birthday is Friday! I'm going to be thirty-::cough::

And my Horrorquilt is coming along. I have seven and a half squares to go.

These are the ones I've done lately: 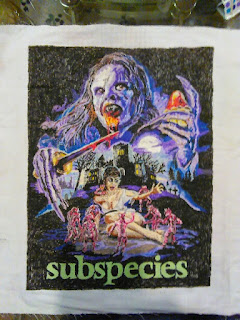 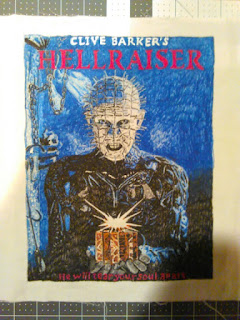 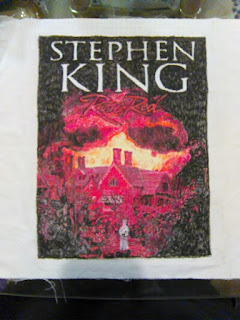 I should be finishing my Phantasm 2 square tonight. I hope. 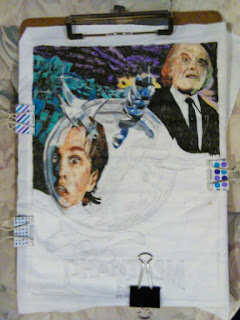 I also need to get on making part 2 of my "how to make a painted block quilt" posts.

But for now, I hope everyone has a wonderful week and I hope to see some of you at my release party!

Posted by Brooklyn Ann at 4:35 PM No comments: 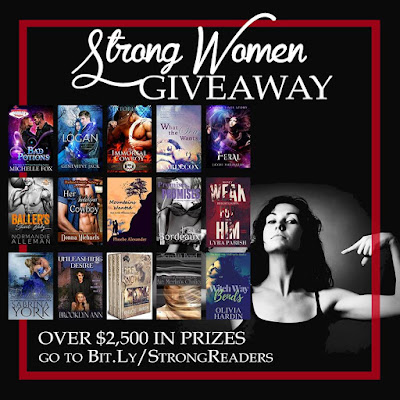 A group of authors, spearheaded by the incomparable Bonnie R. Paulson and Melissa Storm are having a mass month-long giveaway in celebration of strong women in romance. There are over $2500 in prizes. There will be weekly winners of $100 and two grand prize winners of $1000. My jaw dropped when I saw the figure.

Too bad I'm excluded from winning.

Why is that? Because I'M one of the participating authors!

That's right, you'll see on the bottom row of the picture that Unleashing Desire is one of the featured books.

And holy crap UNLEASHING DESIRE comes out in only 13 days!!!

You can preorder it here!

And with those sign ups come FREE BOOKS! And even more giveaways. I give away a free book to everyone who signs up for my newsletter, for example. And I have a new giveaway every month! And Pssst! I heard that most of the 150 participating authors are doing the same.

So if you want to win some cash and get free books, be sure to sign up! Bit.Ly/StrongReaders

I also have another giveaway going on Amazon for ecopies of With Vengeance (Hearts of Metal Book 2) You can go here to enter! With Vengeance Giveaway.

In other news I have 9 more Quilt squares to go and I'll be sharing some more soon.

Posted by Brooklyn Ann at 3:10 PM No comments: