Cover reveal for BITE ME, YOUR GRACE! 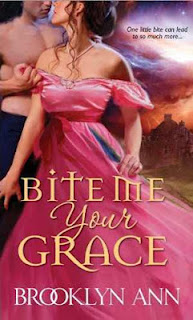 April 1st, you guys! ...and in the meantime, BITE ME, YOUR GRACE is available for pre-order on Amazon and Barnes & Noble!

Okay, I'm going to go back to squealing and jumping up and down. Have a great weekend, all!
Posted by Brooklyn Ann at 8:19 PM No comments:

It's the Halloween season, which means I'm back with more movies recommendations. From scary to goofy, from classic to obscure, there should be something here to get you into the Halloween spirit.

I totally gotta thank the awesome Urban Fantasy author, Jess Haines, for turning me onto this hilarious French film. Chock full of corny humor, puns, and off-color shenanigans, I couldn't stop laughing. There were spoofs on spoofs! 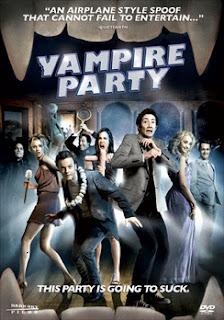 My husband introduced me to this one. A group of people wreck a plane on an island off the pacific northwest coast and encounter the only inhabitants: an old-school "Ma and Pa Kettle" couple and their three "kids." I gotta say, it's one of the most creepy and messed up movies I've ever seen. It's flat out WRONG on so many levels, but you can't look away....and then you can't stop traumatizing other people with it and recommending it on your blog.

I chose these for something family-friendly. These movies epitomize the universal adage: "FOLLOW DIRECTIONS!"

What really made this movie awesome was its quirky characterization. Every member of the cast has their time to shine. For the most part, FRIGHT NIGHT is lighthearted and full of laughs... except for the scene with the wolf. Completely mind-blowing in its incredible display of emotion and special effects, it REALLY makes this one epic.

Holy mind-f*ck, Batman. Watching 1408 almost makes you feel like you're on drugs. With a deceptively calm beginning, the film soothes you into a false sense of security before accelerating the crazy-sauce to an almost unbearable adrenaline rush.

Yeah, not exactly a "P.C." title, but if you like Craptastic horror movies, you'll love this one. It's the sequel to "Monsturd." The evil scientist who created the poop monster now unleashes his next evil plan: to turn special needs people into an army of supergeniuses to help him take over the world. Unfortunately, his experiment has some horrifying side effects.

Remakes are usually a tough sell for me, but I totally love this one more than the original. For one, it stays fairly true to the original. For another, they actually gave the heroine a brain and didn't have her obnoxiously screaming the whole time, which was the main reason I didn't love the 1974 version.

Okay, this is more like a bunch of mini-films, but they're all a lot of fun. Sai King's cameo is one of my faves. "Meteor shit!" LOL.

Sometimes when you randomly rent a movie, you are pleasantly surprised. This one is another "holy hell, that's disturbing!" kinda flicks. I'm not usually a fan of serial killer movies, but this one's intriguing and twisted enough to keep my attention.

Okay, the book is waaaaaaaay better, but the movie has its good points,Tim Curry being one of the biggest ones. Either way, the premise of a group of misfits finding true friendship and defeating a monster has got to be one of the best stories ever.