ONE BITE PER NIGHT virtual tour!!! 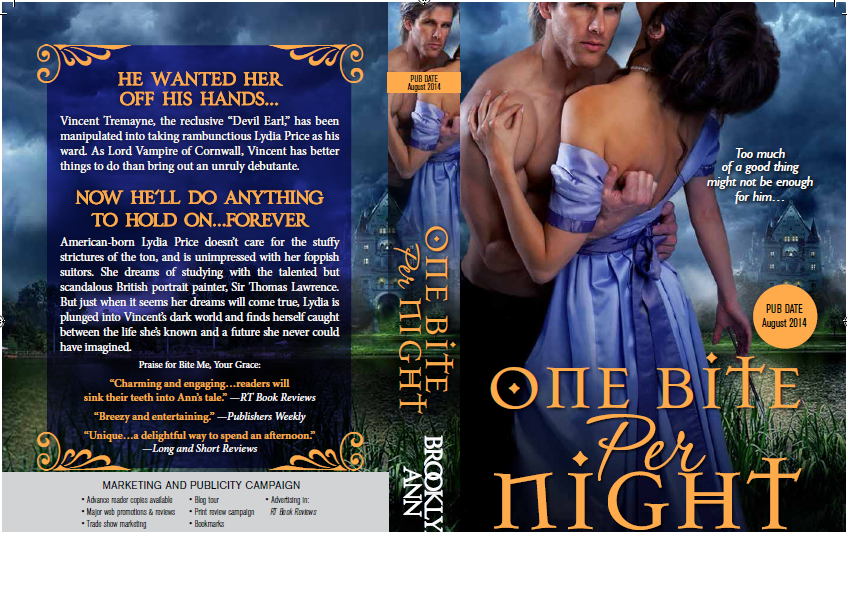 As you've observed, I haven't blogged in almost a month. The reason why is because I was busy writing posts and answering interviews for my virtual tour for ONE BITE PER NIGHT, which releases, OMG, on TUESDAY!!!

The tour commences tomorrow and I will be giving away books at every single one, so please join in the fun and come see me at all these awesome places on the interwebz!


Posted by Brooklyn Ann at 6:33 PM No comments:

JESS HAINES's ENSLAVED BY THE OTHERS is out now!

This is book 6 in the H&W Investigations series and it is AWESOME, you guys. Jess gave me an excerpt to post so you'll see what I mean. :)


Coming July 1st, 2014 from Jess Haines: ENSLAVED BY THE OTHERS

If I hadn’t already been so stunned by the contents of the room, I quite possibly would’ve been shocked immobile by the palpable interest of over a dozen—old—no, ancient—vampires locked on me. This included Max, whose steely grey eyes had widened as he sat up in the oxblood leather chair he had been lounging upon, clearly taken aback by my spectacular entrance. The weight of age in this tiny room was crushing; a football stadium would be too small to contain the power they were unconsciously radiating. It only took a few seconds for me to figure out that, whatever the hell they were doing here, obviously they now considered me part of the menu. I hastily backed up, using my arms to cover as much of myself as I could, while Max schooled his own features into a passably blank expression.
“Of course,” Max said, his smooth voice carrying only the tiniest hint of irritation as he eased back in his seat and nodded in my direction, “I had not intended to showcase her so soon, though I don’t suppose there’s any harm in it. She is newly arrived, and has not been groomed properly for servitude yet. I doubt you would be interested in one so fresh, Kyle.”
I skittered back, but a guard who had been standing to one side of the door barred my escape and I backed right into him. He laughed at how I jumped at the unexpected contact before giving me a little shove in Max’s direction. I pivoted and darted to the side so I could press against the wall instead.
No weapons, no way out, and surrounded by vampires. I was on the verge of hyperventilating, and Max didn’t seem keen on stopping the guy he’d addressed as Kyle from approaching me.
This new vampire was well dressed in a tailored “I make a thousand dollar suit look like cheap trash” way. He set aside a cane with a freaky demon-looking thing crouching on top with what I would swear were real diamonds for eyes before approaching me. The power of his mien paled to the invasive metaphysical touch that brushed over my skin, tasting some intangible part of me and making me want a piece of sandpaper, a pumice stone, and the world’s hottest shower to scrub the feel of it off of me. His manicured nails were blunt, shining as brightly as that whiter-than-white smile when he ran a smooth fingertip over my cheek, the other hand lifting to toy with one of my bra straps. I flinched and batted his hands away before twisting aside and putting some much-needed distance between us.
“Mm, perhaps you’re right. Aside from being fresh, she’s got facial scars. I do hope you weren’t intending on offering damaged goods.”
Though I wasn’t often hung up about my looks, his comment sent my hand flying to my lower lip in reflex. I often did my best to forget about the scar left behind when Peter bit me, nearly tearing my lip in half in the process of assaulting me.
Another vampire spoke up, his tone dripping disdain. “Look how scrawny she is. No meat on her where there should be. And that skin of hers is a wreck—the mark on her face is not the only one I see.”
And another. “This one is disappointing, Euphron. Very disappointing.”
Scowling, I dropped my hand away and balled my fingers into tight fists of rage at my side, finding the condescending laughter of the others in the room too much to bear. Max started speaking but I cut him off, shouting loudly enough for most everyone to flinch.
“I’m not a fucking pet, I’m not your fucking plaything, and who gives a flying fuck if I’m scarred? Ask Max how it happened. I got it while I was busy killing one of your own, you fucking leeches.”
Stunned silence followed my pronouncement, and I took advantage of the moment to dive for the door again, shoving the surprised guard out of my way.
“Stop.”
The word was quiet but forceful. Every muscle in my body went rigid and I found I couldn’t move.
“Come here.”
The other vampires watched with interest as I turned around, breaking out in a cold sweat as I fought the command. I managed to hold out until I made the mistake of meeting Max’s eyes. Though I didn’t want to do it, one foot lifted, then the other, bringing me closer to him. After three steps, I was back in the room—and found at that point that I could stop, though I couldn’t withstand the power of his spell enough to run again.
“Extraordinary,” commented another vampire that had been quiet up until now, his fangs glinting as he favored me with a wolfish grin. “I do believe this one doesn’t care for you, Euphron.”
A few of the others seemed to find this funny, smirking or making wry comments of their own. Catty bastards.

Author Bio: Jess Haines writes about furred and fanged things that go bump in the night. Best known for the H&W Investigations urban fantasy series, she's been writing since she was a teenager and was first published in 2010. Visit her at www.JessHaines.com for the latest news and updates.

Enslaved by the Others Book Description:

Vampires, werewolves, magi and worse—the Others have joined the mortal world, and there's no turning back now…
As a New York P.I. and Other specialist, Shiarra Waynest has been in plenty of trouble before. But waking up in a windowless room the prisoner of a vampire slave trader is a shock for anyone. Shia has her wits, her bravado, and a couple of used staples, so maybe she can take on a mansion full of serious evil.
But although she's desperate to escape, Shia needs some answers too. Her friends are in danger. There are betrayers and spies among them. And even if she can figure out what's going on and somehow get a message out, she's still a captive of the worst kind…

Posted by Brooklyn Ann at 9:36 AM No comments: