To Tempt a Sorcerer is on Netgalley for a limited time!

Anyone who would like to read To Tempt a Sorcerer for free and is willing to review it, you can get a copy on NetGalley. Reviews are CRUCIAL for readers to be able to even see if my books exist.

Anyway, you can grab a review copy of To Tempt a Sorcerer HERE!

And if you want to read an excerpt, check out the page on my Website! 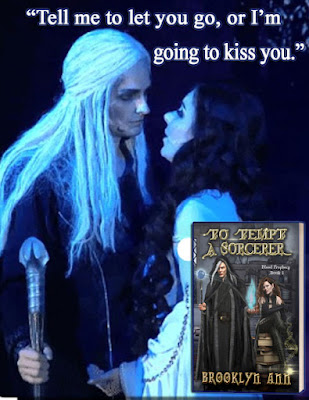 Of course, if you're more into helping an author buy groceries than reviewing books, you can buy To Tempt a Sorcerer on

Posted by Brooklyn Ann at 1:53 PM No comments:

To Tempt a Sorcerer release day! 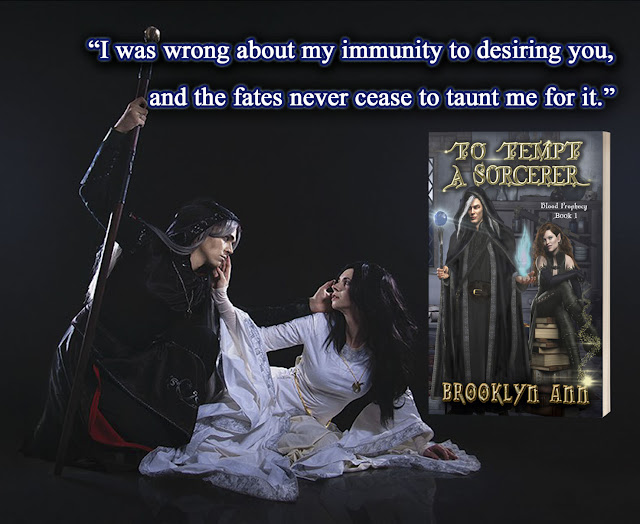 To Tempt a Sorcerer is here!

This fantasy romance is a spinoff of my Brides of Prophecy series and reads as a standalone.

This might be the best grumpy-sunshine romance I've ever written. I had a lot of fun making teaser graphics. Like this one: 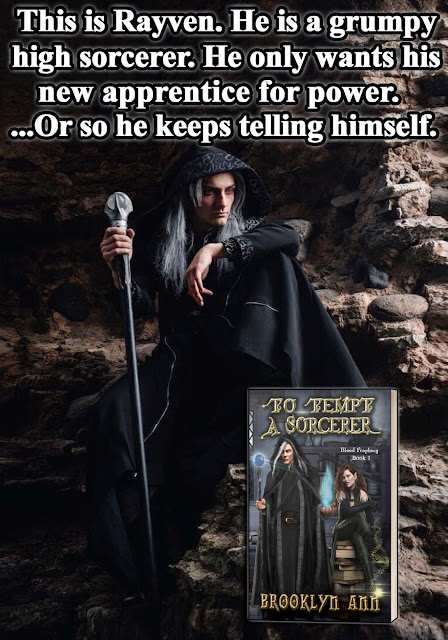 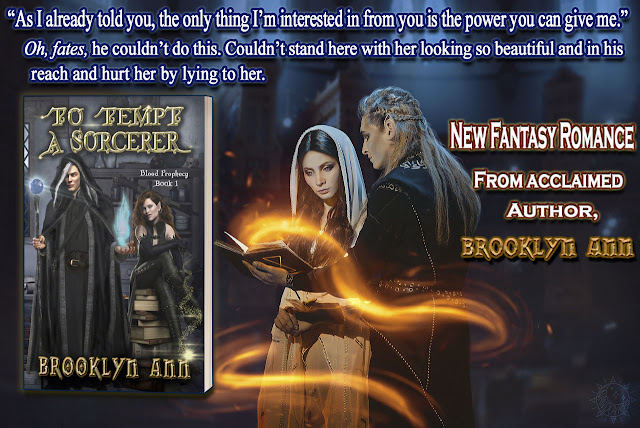 Rayven Niltsiar, my tribute to Raistlin Majere, the grumpy mage in the Dragonlance books, and my first book boyfriend, has been a character since the rough first draft of Conjuring Destiny that I started back when I was 15. So... I've been waiting 25 years to write this guy's book. I had the basics of Tiana's character in my head since I was 18 and pregnant with my son, but it wasn't until a couple years ago that I learned who were parents were. If you've read Reclaiming the Magic, you know already. If not, I won't spoil it for you.
Anyway, definitely check out To Tempt a Sorcerer! It's a lot of fun!
Posted by Brooklyn Ann at 11:09 AM No comments:

More free books, and a snippet of To Tempt a Sorcerer!

Hey everyone! I'm participating in the Bad Boy Rockstars free promo, offering up a free E-copy of Forbidden Song, my angstiest rock star romance. This promo is a newsletter subscribe one, but if you're already subscribed, I think you can just go HERE to claim the free book. If it doesn't work like that, just reply to the newsletter I sent out today and I'll hook you up.

You also have a couple more days to grab a free copy of my fantasy romance, Conjuring Destiny, in the May's Magical Book Fair. This one doesn't require a signup, so GRAB THOSE FREEBIES! 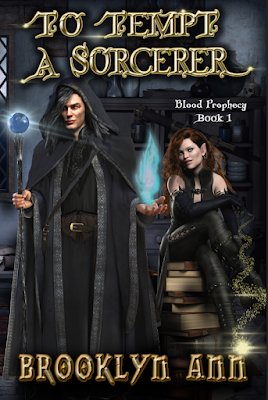 I'm almost done with To Tempt A Sorcerer. This story is going to be so fun!

Here's a cute snippet I wrote:

“Delgarias commanded all high sorcerers without apprentices to take one so that more high-level mages will be better prepared for the war. Surely he told you about that so you both could gloat together.”

“Well, I thank you for your sacrifice.” Zareth smirked. He’d definitely heard about Delgarias’s command. “I’d still like to meet her.”

Panic fluttered in Rayven’s gut. There was no way that the half faelin sorcerer wouldn’t sense Tiana’s luminite blood. No way he wouldn’t tell Xochitl and Kerainne Leonine. And then they’d all assume the worst of him. As people always did.

Your wanting her to increase your power isn’t exactly noble, a strange voice spoke up in his mind.

Zareth laughed, low and sinister. “You know something interesting? For all our centuries of enmity, you’ve never directly lied to me before. You’re here because the girl found a way to sneak to Earth, aren’t you? That’s why you have all these questions about disobedient apprentices and appropriate punishments.” When Rayven remained frozen and didn’t reply, Zareth shook his head and stood. “Never mind. I can laugh at your predicament later. I need to head back to my wife before Bleeding Vengeance begins playing. I’ll meet your apprentice another time. You can’t hide her forever.”

Can’t hide her forever. The same words the Duchess of Kinsen had thrown at him, only far less teasing coming from the King.

Still, Rayven sighed in relief when Zareth vanished from his side. He wasn’t ready to let anyone know that he had a half-luminite in his care. The power he hoped to get from their arrangement was now secondary. He didn’t want to lose her.

As you can see, this isn't only a Brides of Prophecy spinoff, but there are also some Hearts of Metal connections.

You can preorder on

Posted by Brooklyn Ann at 3:21 PM No comments:

Posted by Brooklyn Ann at 12:54 AM No comments:

To Tempt a Sorcerer is now available for preorder! 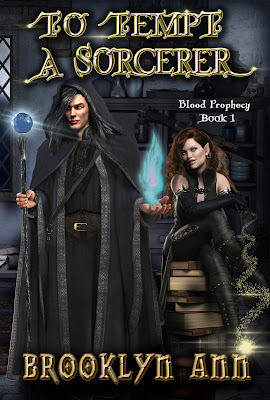 To Tempt a Sorcerer is now available for preorder!

Right now, the release date is August 20th, but that might get bumped up sooner if life and writing go well.

You can preorder on

Posted by Brooklyn Ann at 1:46 PM No comments:

Kissing Vicious is FREE for a Limited Time! 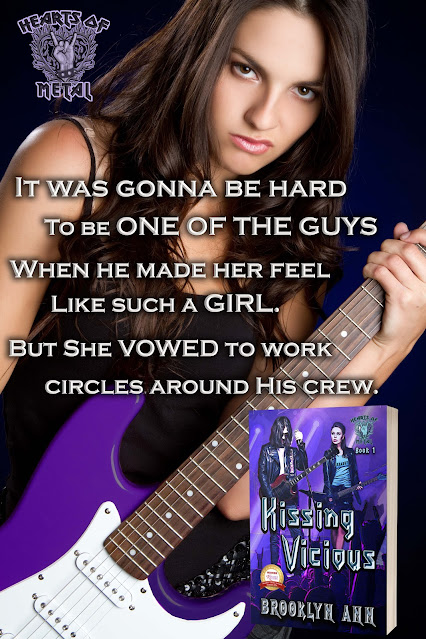 Happy Valentine's Day, everyone! My rock star romance, Kissing Vicious is FREE for a limited time: 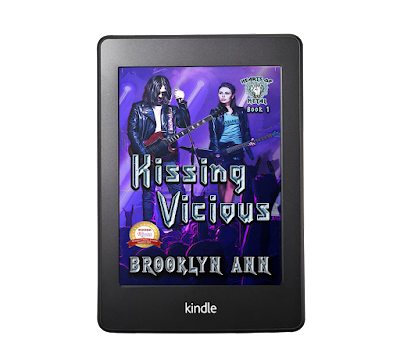 Grab it now because it goes back to its regular price on the 16th!
Also, if you're not already following me on Bookbub, you probably should because there's going to be another exciting freebie later this month!
Posted by Brooklyn Ann at 7:42 PM No comments: 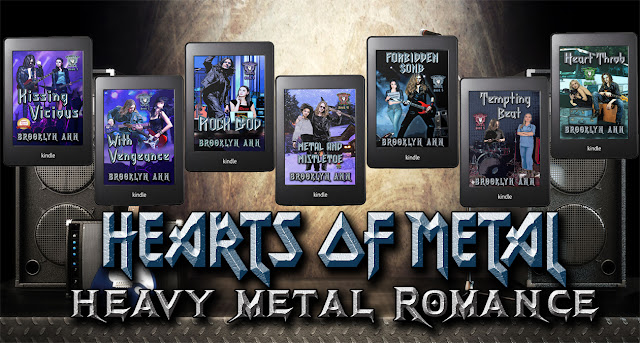 My big Twitter giveaway is still going on. If you haven't entered, go HERE for details.

The new editions of the last 3 Hearts of Metal books are live!
First up is the new edition of Forbidden Song! 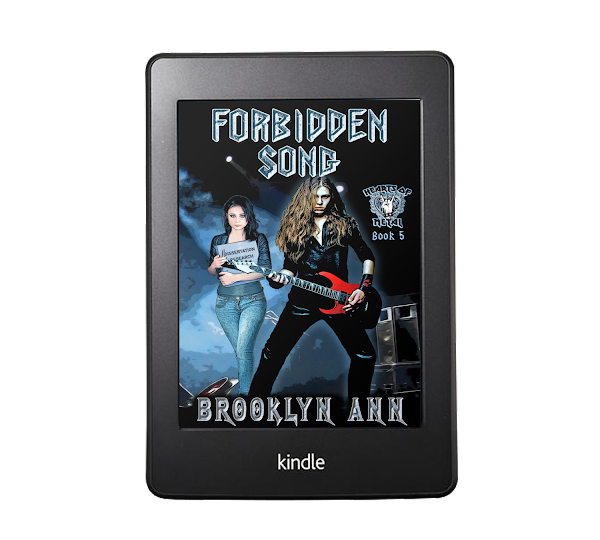 He was everything she was told to stay away from.

Christine Mayne is determined to get out from under her controlling brother’s thumb. To do so, she plans to earn her PhD from studying group dynamics in heavy metal bands, and then become a band therapist. The problem is that Quinn Mayne, has barred her from the metal world because of a traumatic event in her past.

The opportunity to study a band comes when Cliff Tracey, lead singer of Bleeding Vengeance doesn’t recognize her. Christine tricks him into smuggling her onto the bus to accompany the band on their tour. When he discovers her deception, he’s furious. Christine tells herself that her efforts to talk to him are for her research and not because she’s drawn to his sensual presence.

Cliff Tracey is going through an existential crisis. Suddenly having a different one-night-stand after every gig has lost its appeal. He’s ready to get rid of his man-whore label and try getting to know a woman. When black-haired, green-eyed bombshell Christine asks him if she can accompany his band on tour for her research, he thinks the perfect opportunity has fallen into his lap—until he finds out that she’s Quinn Mayne’s off-limits little sister.

Despite his efforts to keep her at arm’s length, Cliff finds himself unable to stay away from Christine. But he has to, because if he gives in to temptation, he’ll cause the biggest rift in metal history.


Here's the link for Forbidden Song: https://books2read.com/u/47QV5g
And then there's Tempting Beat: 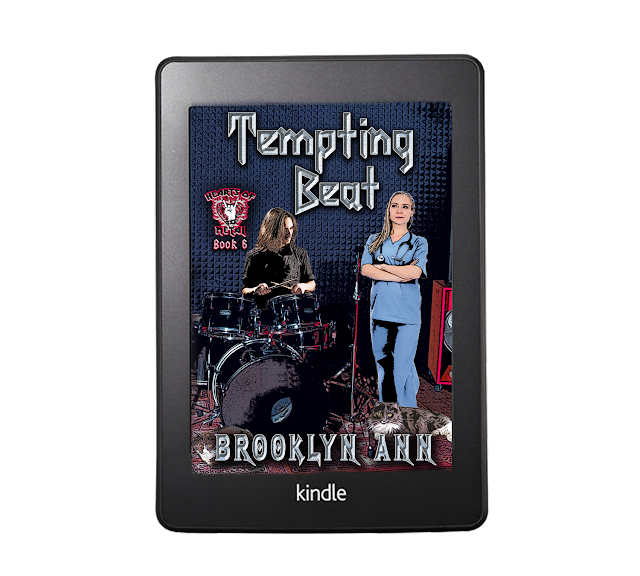 When ER nurse Gwen Mason falls for metal drummer, Roderick Powell, her plans for a lifetime alone with her cats are thwarted.

THE ROCK STAR NEXT DOOR

Roderick Powell, drummer of Bleeding Vengeance, is delighted to have left LA and move into a beautiful new home in a Denver suburb. But as he sees all of his bandmates’ happiness after finding love, he wonders if having a place of his own is enough. When he meets the hot nurse next door, Rod is smitten. She gives him the brush-off, but he’s determined to woo her.

AND THE CRAZY CAT LADY NURSE

Twice divorced and working brutal hours as an ER nurse, Gwen Mason resigned to a life alone with her four cats. When a sexy rock star moves next door, it takes all of her willpower to resist the younger man’s charms. Her resolve is shattered when trouble with the city council throws her and Rod together. One night in his arms, and she’s in danger of losing her heart.

Read an excerpt and get the buy-links: HERE!

And last, but not least, book 7, Heart Throb: 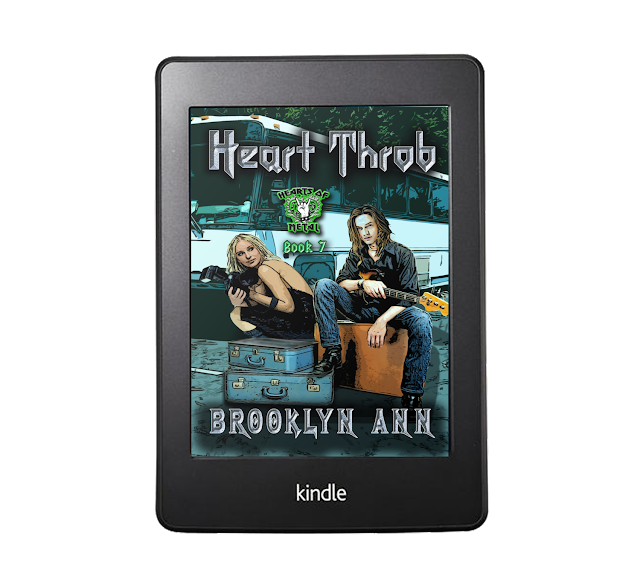 Bassist Brand and filmmaker Lexi have both suffered traumatic pasts, but together, they can heal and have a happy future

Brand Kife, bassist for heavy metal band, Viciöus, is known in the metal world as “the man who never smiles.” He has even less reason to smile when he learns that his band’s tour is going to be disrupted by beautiful filmmaker, Lexi Adams, who’s making a documentary about Viciöus. Brand has secrets that Lexi can’t learn.

AND THE BEAUTY QUEEN

Former child beauty pageant winner, Lexi Adams resists her mother's pressuring her to become a model and is instead determined to be a successful filmmaker. She’s thrilled to film a documentary on one of her favorite metal bands, but Brand Kife is making her work difficult. First by being uncooperative in interviews, then by distracting her with his sinful good looks and aura of mystery. When they give into temptation, Lexi wants to learn about Brand’s traumatic past, but first, she will have to trust him with her own.

For an excerpt and buy links, go HERE!

The new edition paperbacks of Forbidden Song, Tempting Beat, and Heart Throb should be available later this week.

And I'm working on a Brides of Prophecy spin-off book that still needs a title, both for the book and for the spin-off series.

This book is the story of Tiana and Rayven Niltsiar. If you haven't read Reclaiming the Magic, then the mystery of Tiana's identity remains intact. But if you have, this should still be a fun story. My newsletter readers got an early sneak peek at an excerpt, which I will post here next week.

Until next time, thanks for being one of my readers!

Also don't need to be read in order until book 5...kinda

Books do not need to be read in order

Bite Me, Your Grace

One Bite Per Night

Posted by Brooklyn Ann at 9:00 AM No comments: