Conjuring Destiny Comes out on Friday! Come celebrate with me! 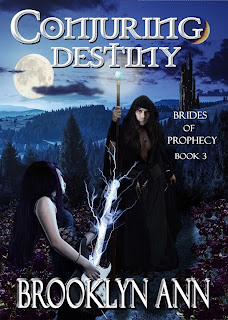 Oh man, the excitement has really been ramping up for this book!

First off, Have you Pre-ordered it yet?


Secondly, if you haven't heard, the first book in the series, Wrenching Fate, is FREE!!

Get it here on:

Pick it up at:

Oh man, I have an awesome lineup of guest authors to join the fun and feature awesome giveaways.

Aside from me, we're going to have

We'll be on Facebook October 23rd from 12pm to 5Pm Pacific time (though you can still participate and enter for the giveaways later than that).

My blog tour also kicks off with interviews, reviews, and giveaways. I'll post the itinerary on release day!

I had a bit of a snafu with my print copies since I lost the cover file when my hard drive died, but I was able to rebuild the cover and they should be available on time!