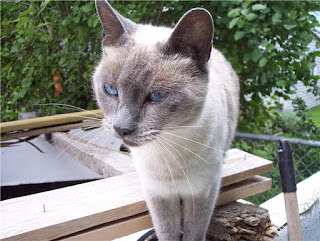 When I was very young, I saw "LADY AND THE TRAMP" for the first time and fell in love with the Siamese cats. Shortly after I declared: "When I grow up, I'm going to get a Siamese cat and name her Isis. She will wear a jewel studded collar and eat out of a crystal dish and I will love her and spoil her rotten."

And so I did. The "crystal" dish didn't last long thanks to the kids, and the jeweled collar made her itch, but Isis was indeed loved and spoiled rotten. I'd hold her and pet her and croon "my precioussssss." We couldn't watch LORD OF THE RINGS without her tripping out, thinking the TV was talking to her. :)

When I got Isis, she was small enough to fit in my purse...which she often rode around in until she was big enough to perch on my shoulder. Unlike all previous cats I'd brought home, Isis didn't hide under the bed for three days. Instead she strode right up to the dog (who was like 20 times her size at the time) and started growling. Then she pounced on him....then they were wrestling...and then he belonged to her, heart and soul.


Like most Siamese cats, Isis was very territorial and protective. She used to guard us and our property with extreme vigilance. For a long time she'd watch me bathe and try to grab me when I ducked under to wash my hair because she thought I was drowning. She chased the deer out of our garden and often attacked them. The neighbors would laugh at the sight of her perched on a doe's back, biting and clawing it like a miniature lioness. I wish we had pictures or videos of that.


Isis was completely fearless. She was a master huntress. One time, she even took down a crow. If she wanted something, she was pretty good about getting it, whether it was a few licks of my ice cream cone to half of my string cheese. She would perch wherever she wanted.

Last week my husband was out of town. Isis went missing, but it wasn't unusual since she stays out for days in the summer, especially when she's mad at us. I figured either she was angry at my husband for being absent or she'd gotten trapped in my neighbor's shed again.

Two days after my birthday... (and quitting smoking), my neighbor approached me and asked if I was missing a cat. My heart rose with hope because usually after he asks that, he says he got dive-bombed after opening his shed.

Sure enough, there she was on his property. It looked like she'd been dead a few days. Maybe it happened on my birthday. She was too far away from the road for it to have been a car, and she wasn't bloody and mangled, so it wasn't the psycho killer dog next door. My other neighbor said he's been watching her chase deer just the other night, so I'm thinking she tangled with the wrong one.

I like what one of my friends said: "She must have been one balls to the wall cat to have burned up her nine lives so quickly."

Indeed she was. Goodbye, Isis, the most bad ass cat I've ever known. You will be missed and never forgotten.