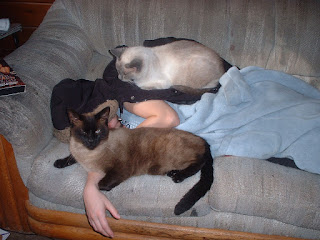 If you'll kindly take a look at my progress bar, you'll see that I completed the rough draft of my contemporary romance: Solo Project For Two. W00000T!!!!


I follow Stephen King's advice to put a rough draft away for 4-6 weeks and work on something else. That something else shall be another round of revisions on the first two books in my paranormal series. I CAN'T WAIT to get back to my paranormals! This last was a contemporary but it wouldn't get out of my head so I had to write it.


I'll start with book 2 in AN IRONIC SACRIFICE since that progress bar has been sitting idle for months and I have pages of notes and tons of helpful beta crits to work with.


And speaking of crits, since I'll be in "editor mode" I'll be doing a few crits for some friends. I will also be catching up my social networking and hunting for paranormal guest posters. :)


But this period won't be all work and no fun. I'm finally going to get to attack my giant TBR pile...and be lazy on the couch watching movies...and getting rowdy late at night on twitter. Oh, twitter, I've neglected you so. :(


Then I'll get on rewriting the "Official" first draft and while that's off to the betas I'll work on rewriting book one. Then I get to do my research for book 3.


Hopefully by the time I finish the third draft of SOLO PROJECT FOR TWO, I'll get to begin the third book in my Brides of Prophecy series, already loosely titled: QUEEN OF PROPHECY.


What do you do between drafts?
Posted by Brooklyn Ann at 12:26 PM