Why Paranormal Romance? An Analysis. 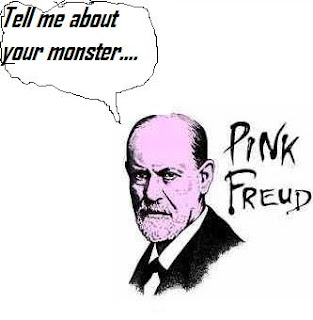 I'm one of those people that has to know "why" for everything. I pick things apart and dissect them further under a microscope. One of my mom's trademark scolds to me was, "Brook, stop being so f***ing analytical!" But I just can't help it. ..And one evening I started analyzing my favorite fiction genre: Paranormal Romance. It rocks! But why? I came up with a few theories, but please keep in mind that I am not a trained psychiatrist, so many of these are probably crackpot ideas. But I think they're still fun.

a.) You know those catty women who like to rub in your face (especially if you're single) how good looking their man is, how much richer, etc.? Imagine firing back: "Oh yeah, bi***, MY man can fly, has superhuman strength AND is a walking wet dream!" HA!

b.) Or even better: "Supernatural Boyfriend Beats Loser Ex in Every Way." Sherrilyn Kenyon does awesome with this, in my opinion. The heroine's heart was broken by her loser ex...but sometime later in the story, loser ex and new paranormal hottie cross paths. Most of the time, he doesn't even have to touch him and loser ex is shrinking away with his tail between his legs. Good stuff!

2.) Side Effect of Women's Liberation. I may come under fire for these, but please keep in mind, they're just random musings.

a.) Only a supernatural guy can get away with "alpha/ protective" tendencies without offending a lady's strong woman sensibilities. Because he's an ancient vampire and thus old-fashioned/ because of his werewolf instincts/ etc... a gal just has to accept...and secretly love that that is just how he is.

b.) Only a supernatural guy could handle a tough supernatural woman without it hurting his masculinity. Our culture seems to imply that the stronger a woman becomes, the more she has to give up her femininity....and the world seems to hint that men don't like that. But say you were a kick ass heroine with supernatural abilities? Surely a kick ass hero with abilities of his own won't be threatened.

c.) Only a supernatural guy can protect/ take care of me. In today's world, women aren't supposed to "need" a man to take care of them. We do just fine taking care of ourselves. But...admit it: The thought of a big strong man who REALLY could take care of you and destroy bad guys in a single blow is kinda nice once in awhile. But it's really hard to picture your average corporate guy or lawyer rising to the occasion. A vampire, on the other hand...

3.) Justification for Natural Desires that Society Causes Us To Be Ashamed Of:


a.) Supernatural Sex Appeal: It is still bantered about that if a woman likes/ wants sex, then she's a whore. But if a supernatural event sends you tumbling into the man's arms, you can't be blamed, right?

b.) Supernatural Stamina/ Skills in the sack: No "one-minute-wonders" here! And he has superhuman strength to maintain some hot positions!


4.) Dealing With Prejudice:
Prejudice and bigotry is all around us. Everyone suffers from it one way or another. Fiction helps us deal with it. Whether it's vampires vs. werewolves, demons vs. angels, or katagari vs. arcadian, we can empathize.


5.) Monster Within, Monster Without.
What inspired this post was reading RAGE by Richard Bachman (Stephen King) for the second time. The 1st read is too much of a slap in the face to be able to process, kinda like the 1st time you see "Fight Club." Anyway, the story is about a kid who loses his mind, shoots his teacher and holds his classmates hostage. Throughout the story the class reveal their inner demons and come to respect each other and themselves.

So...maybe paranormal romance is a way to bring out your inner monster...and come to love it a little?

6.) Fear of Not Being Valued:
Okay, this one's a little dark, twisted, and sad. There's a paragraph in RAGE that brought me to tears, it was so close to home (pg. 116 in THE BACHMAN BOOKS, Signet, 1986):
"...I felt really good. It was like the Christmas spirit and all that. I was thinking about getting home and having hot chocolate with whipped cream on top of it. And then this old car drove by, and whoever was driving cranked his window down and yelled, 'Hi, cu**!'"
"........'Just like that,' she said bitterly. 'It was all wrecked. Spoiled. Like an apple you thought was good and then bit into a worm hole. "Hi, cu**.' As if that was all there was, no person, just a huh-h-h....' Her mouth pulled down in a trembling, agonized grimace. "And that's like being bright, too. They want to stuff things into your head until it's all filled up. It's a different hole, that's all. That's all."
Okay, I hoped I followed the rules in quoting that paragraph right.

So I wonder how many women besides me fear that that is all men see when they look at us, just a hole. And maybe it takes a supernatural being to see us and value us as human beings.

7.) Good Old-Fashioned Escapism:
The real world can be depressing and boring. It's fun to take a break from it!

So there's my half-baked theories on the appeal of the genre. Feel free to call me crazy. But what are yours? I love to theorize!
Posted by Brooklyn Ann at 12:23 PM