Why I wrote a heavy metal romance series. 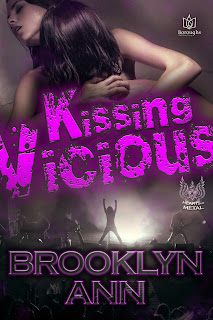 And I totally forgot to blog about it here. Booooooo.

But, better late than never.

Many of you know that I got my start writing historical paranormal romance. However, as much as I love writing about the scandals and ball gowns and dangerous dukes, and of course, sexy vampires, I also love heavy metal music.


Something about shredding guitar riffs, fast drums, and powerful vocals makes my passion rise.
Aside from taking joy in the music, I’m also fascinated with the musicians themselves. The hard work they endure to fulfill their dreams, the crazy situations they encounter on the road. I’ve read all about Ozzy Osbourne’s notorious exploits, Ronnie James Dio’s extensive accomplishments, and Dave Mustaine’s struggles with drug addiction as he sought to outdo the band he was fired from… and succeeded by creating my favorite band, Megadeth.

As I learned more about my favorite rock stars, I realized that there is more to the metal world than sex, drugs, and rock n’ roll. They are passionate artists and although some are real jerks, others astounded me with their kindness to fans and charitable acts.

I also realized that the music industry would be a very difficult world in which to find love, with the constant travels from gig to gig, and the overzealous groupies. But of course, my romantic imagination spun a tale.
And that’s how Kissing Vicious was born. The world of Heavy Metal is mostly male dominated.  What if a woman worked as a roadie? How would the band and crew see her? What problems would arise if she got involved with one of the band members?

My heroine, Kinley Black, is about to find out.

Here's the blurb for KISSING VICIOUS!

Aspiring guitarist Kinley Black is about to get her first big break—as a roadie for Viciöus, her favorite heavy metal band, and for the rock god she always dreamed might make her a woman.
THE ROADIE
At 15, aspiring guitarist Kinley Black wished she were a boy. At 16, after hearing Quinn Mayne sing, she wanted him to make her a woman. Now, at 22, her dreams have come true. Quinn’s band Viciöus needs someone to lug their amps around the country, to strive and sweat with the guys. She just has to act like one of them.
AND THE ROCK GOD
Quinn had to admit the new chick could pull her weight, but that didn’t mean his road manager made the right choice. Taking a hottie on a heavy metal music tour was like dangling meat in front of a pack of feral hounds—and Quinn could be part dog himself. But more surprising than her beautiful body are Kinley’s sweet licks, so that no man could help but demand a jam session. Quinn will soon do anything to possess her, and to put Kinley in the spotlight where she belongs. And to keep her safe and sound from the wolves.

Buy on All Romance Ebooks

Posted by Brooklyn Ann at 9:08 PM No comments: Links to this post

Who wants to Party? 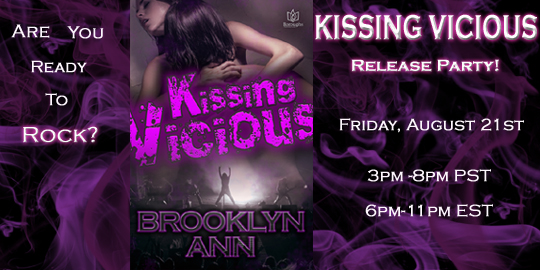 Because this Friday, August 21st, I'll be celebrating the release of my first heavy metal romance: Kissing Vicious.

For the duration of the party there will be a ton of guest authors having awesome prizes. Here's the lineup:

As for me, aside from giving away copies of my new release, I'm also giving away a prize pack to one lucky winner, including an autographed copy of BITE AT FIRST SIGHT, Kissing Vicious Guitar Picks, bookmarks, and a jar of hand-picked, homemade huckleberry jelly! 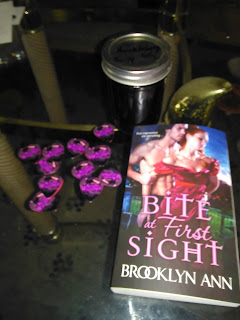 To attend the even, simply click on the event link and be on Facebook on Friday between 3pm and 8pm Pacific (6pm and 11pm Eastern) I hope to see you there!

Sorry I've been away for so long. Aside from some freelance editing, work on my second metal romance, I've also been plugging away at the much awaited third book in my BRIDES OF PROPHECY series.

I even came up with a title.

I also finally got the cover how I want it. 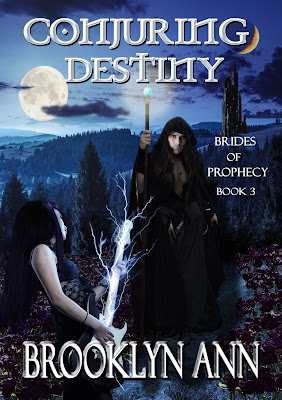 But most importantly, I've accomplished sufficient progress to be able to place it on pre-order.

So here is the blurb and here are the pre-order link: Alas, Nook is a butt and won't let me set up a pre-order, but here's the Kindle link for now: So Pre-order it now!

and I'll also be getting it up there for Kobo and Apple in a day or two.

I am very excited about this book. This is where the series takes a stranger turn. It has been the most complex and challenging thing I've ever written.

There is also awesome news around the corner for my upcoming heavy metal romance series, so stay tuned!
Posted by Brooklyn Ann at 2:21 PM No comments: Links to this post