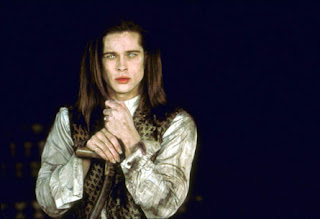 A friend and I were discussing...okay, ranting a paranormal series that neither of us are particularly pleased about. As much as I wanted to call those vampires wimpy, she pointed out that they were practically invincible. This is a bad thing. Despite one's desire to make their characters total badasses, there is little conflict in such a situation. Characters need weaknesses, or there's no way to challenge them, no way for them to grow, and no way for the reader to worry about their survival. Thus, you have no story.

I had no problem with this with my vampires. I like the classic theme of a creature of the night, so the sun will kill them. Still, I had to go a step further and see what else hurts them. Fire, starvation, and anything that does major heart damage for a long period of time. Another limitation, albeit not a fatal one, is that though they can taste food and consume it in little bits, they cannot digest it well. For some that is a major bummer.

As for my luminites, (creatures like a cross between angels and Greek muses) I had bigger problems finding their weaknesses since they are my own creation. My main heroine is super-powerful and I found myself walking a fine line with her being too "perfect." Of course, one of her strengths, the inability to feel fear, can double as a weakness, since she'll get herself into dangerous situations. Also, the cold really puts a damper on her magic, among other things.

What weaknesses do your paranormal characters have? How do they play out in the story?
Posted by Brooklyn Ann at 10:01 AM