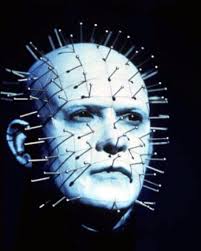 I'm going to try having a tradition for Fridays in which I explore some unsavory themes. Although paranormal romance novels have beautiful love stories, otherworldly escapes, and unique characters, there's always dark aspects.

This week's topic is "Unholy Lust."

With any romance, lust is a must or you have a boring story. Of course, between the hero and the heroine, lust always leads to eternal love...and steamy sex!

But within a story, lust isn't always a good thing. It can lead to disaster for one or more characters. I was watching HELLRAISER last night and couldn't help but notice all the bad things happening because of lust. There was the woman who murdered people to resurrect her husband's brother...all because he was that good of a lay. The husband's brother had acquired a puzzle box which sent him to hell to be tortured by Pinhead and the cenobytes with ultimate pain and ultimate pleasure (really, I didn't see anything in there that looked like pleasure, but that's just me). All because he had a lust for power and more pleasure.

With paranormal romance, there's plenty of that going on. The vamp or shifter is always afraid of harming the heroine with his almighty libido. Or the villain creates havoc because they either want to sexually own one of the characters or get revenge because they were rebuffed.

In my Brides of Prophecy series, the creator of vampires sows his own destruction when he rapes my main character's mother. So, like I said, lust isn't always a good thing.
Posted by Brooklyn Ann at 10:43 AM