Writing is a JOB, damn it.

What do Eloisa James, Stephen King, J.K. Rowling, and Jeffery Deaver have in common? They all write full time. Putting out kick ass novels is their job. But once upon a time, they had to work other, less fun jobs to pay the bills. Somehow between their day jobs and family lives, they had to squeeze in their writing time, which they didn't receive any pay for and no guarantee that they ever would.

But somehow they pressed on with their writing. In cramped houses with noisy children, dirty dishes, and {insert adjective} spouses, somehow they pressed on. Part of it was likely that force that drives all writers. We have stories within us and they just HAVE to come out. But another part was because they likely treated it like another job: Show up and do it these days, these times, or you're FIRED! ...or something like that.

I live in a house that is 600 square feet. There is literally nowhere for me to go. My laptop sits on a TV dinner table in the living room, where the TV is always on because my husband is home all the time and he's one of those people that needs constant noise. Every once in awhile I get lucky and he'll go away for awhile and I'll get some work done. But most of the time I have to struggle to drown out the quacking box and I'm lucky if I get more than a thousand words in a 6 hour period. And then I have the husband complaining that "I'm ALWAYS on the computer."

I have tried and tried to get him to go away for a set period of time so I can get more work done. My efforts usually fail, but now I've realized something. It's not up to him, it's up to ME. I need to treat my writing as the JOB that it is. I need to literally go to work. So I did.

A lot of writers go to coffee shops, but I don't like coffee and I don't like crowds. Also I can't stand the smell of those places...and most of all, I like to smoke when I write. So how could I find somewhere that is like home and I could smoke while I write? I cannot believe I didn't think of it before. THE POWDER RIVER SALOON. 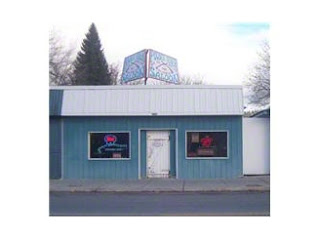 This place has been my home away from home since I was old enough to drink. It's like a CHEERS, everyone knows my name. My friends there helped me get through college, they helped pick up the pieces when I lost my career and then my mother, and were full of support in my pursuit of a writing career. And best of all, there's an electrical outlet right above MY barstool.

The reason I didn't think of it was because I go there usually at night to, you know, drink. But during the day, the place is mellow, attended by a few old timers affectionately known as "the coffee crew." So this morning I tried it out and whaddya know, I banged out 1k in less than two hours. I got a little jittery from the Mountain Dew, but otherwise it was great.

So, this year I plan to "Go to work" at least three days a week and see if my writing improves. Because writing is a JOB, damn it.
Posted by Brooklyn Ann at 10:06 PM