5 Reasons Why Dave Mustaine is Sexy

As I'm wrapping up revisions on my heavy metal romance, temporarily titled, HIS ROADIE, I have sexy rock stars on the brain. And though the hero of my current project more resembles 90's Trent Reznor (more on him another time), I couldn't help looking back at my previous post on what makes a sexy hero and realizing how much the leading man of my favorite band, Megadeth qualifies.

So here's a list and demonstration of what makes Dave Mustaine yummy. 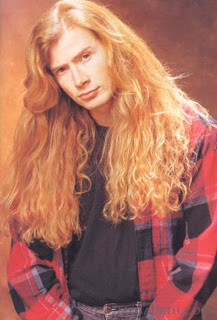 Seriously, LOOK AT IT!!!

2.) He has passion, drive and determination.

For the non-metal-heads out there, Dave helped start a band you may have heard of called Metallica. He was the lead guitarist and wrote most of the music for their debut album, "Kill em All" as well as a significant chunk of "Ride the Lightning"


Anyway, due to multiple misunderstandings, (Btw, contrary to internet memes, James kicked Dave's dog, not the other way around) some warranted, others not, Dave was kicked out of Metallica and handed a bus ticket from New York to LA.

Instead of quitting, he started Megadeth, a band that has rivaled and ultimately surpassed Metallica since its creation in 1983. Both bands are now in the exalted "Big Four" in thrash metal. If you knew of all the first and only time members of famous bands that dropped into obscurity, you shall have an inkling of the magnitude of such an accomplishment.

And both have mended fences and are friends again.


3.) He is extremely talented.

Dave Mustaine is one of the best guitarists in the world. Holy mother of metalness, he employs the most epic blend of shredding thrash, blues, jazz and classical riffs that I am overcome with awe.

He also holds black belts in Karate and Taekwondo.


He's a brilliant lyricist who has a point: Example: "Luck deserted me and the truth beat out my brains. Men rise from steppingstones of themselves from higher things. I've stepped over lots of bodies on my way..." (From Youthanasia). I aced a short story citing the lyrics from that song.

And I believe he's a brilliant vocalist. Many disagree, including Dave himself. He never intended to sing. He only wanted to play guitar, but he has such passion, mischief, rage, and individuality in his voice.

Holy Wars gives me chills while Sweating Bullets just fills me with maniacal glee. (It takes awhile before you realize he's actually singing about something serious.)

The guy expected Dave to be a complete dumbass and was flummoxed when Dave explained everything more clearly than any CNN report. The only metal artist to beat him at that is Dee Snider from Twisted Sister. He turned the senate on its head here!

He also wrote the best memoir I've ever read...probably because he was smart enough to work with a good editor.

Dave's book surprised the hell out of me. For a guy who's notorious for being arrogant and short tempered, he displayed a shocking amount of humility, heart, and modesty.

5.) He REALLY gives a damn about his fans.

Megadeth was among the first bands that embraced the internet and actually interacted with their fans. Every live show he plays it is clear that his audience is his first priority. I am going to show a clip from Megadeth's 2005 performance in Buenos Aires, Argentina. Holy crap you gotta see that crowd. And I especially get the warm fuzzies when he sings the chorus in Spanish for them. (During another song they sang in French for him.)

The joy and energy is mind blowing. And when I saw them perform in a tiny venue in Spokane during a low point in their career, that same joy and energy was there. Just WOW.


My husband's been to way more metal concerts than me and this still blows his mind.

This is why whenever I am sad, throwing on some Megadeth cheers me up.

Who are your favorite sexy rock stars?
Posted by Brooklyn Ann at 3:40 PM