Forbidden Song is available for PreOrder! Here's an Excerpt! 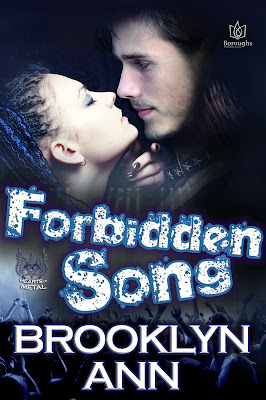 Forbidden Song releases January 11th and this time, you can make sure it gets to your e-reader right away.

You can get it on:

Cliff fought not to glance back at the closed partition door as Klement talked to the roadies about the show’s sound and lights. Christine was being quiet as a mouse, but it was only a matter of time before the others discovered her. A twinge of worry gnawed at his gut. He hoped Klement wouldn’t be too pissed about his stowaway.
His jaw clenched at the childish sentiment. Fuck Klement if he was. The guy was too controlling with how the band worked as it was. Klement wasn’t his father and had no say on his social life. If Klement could have his chick on the bus, Cliff should be able to have one too. Okay, so far Christine didn’t seem interested in being “his chick,” but he hoped that after a time he could persuade her to change her mind. She was like a gift dropped in his lap: beautiful, smart, sympathetic to the trials he had to face in his work. And most of all, she was a challenge, since she wasn’t in his lap.
Not yet.
Of course, maybe that’s where he’d fucked up with Kat. He’d just assumed she’d tumble into his bed like the last ones. Cliff had enjoyed the chase with his first few girlfriends, but as his fame grew, all prospect of pursuit faded. Women lined up to be with him on any terms.
Well, Christine had terms; that was clear. He just needed to find out what they were.
He had a feeling he would enjoy meeting them.
Roderick started to head towards the back of the bus. Shit. They’d only gone about twelve miles. He’d hoped to hold off the big reveal until at least thirty, or until they were out of cell service.
“Hey, Rod,” Cliff said, frantic to distract him. “What did you think of Deity’s set?”
“It was pretty cool,” the drummer said, eyebrows knitting at the abrupt question. “I liked the new song, though I haven’t made my mind up on the percussion.”
Kat elbowed him. “Oh, it was great and you know it. And so romantic of him to write a song based on one of Shana’s books.”
“I suppose.” Rod snickered. “I still can’t believe he ended up with a lady who writes bodice rippers.”
“They are not bodice rippers!” Kat shouted, poking Rod in the chest as the roadies laughed. Cliff took a step back. He’d learned really fast that you did not flip Kat shit for her choice of reading material. She may be tiny, but she was fierce.
Kat continued her tirade. “They are historically accurate stories that have a happily-ever-after and depict strong women who get what they want and men who encourage their empowerment. Dante’s smart enough to see that.”
Klement chuckled. “All right, you two. Break it up.”
Kat sighed. “Fine. But he really should read a romance novel before knocking them. In fact, I have one in the back that he’d—”
Cliff intervened. “Give it up, Kat. Rod doesn’t read books period.”
“I do too. I just don’t read fiction,” Rod retorted, rubbing his wrist. “Anyway, my hand is killing me. I wanna grab my compression sleeve.”
Cliff stepped in front of the door. “Why don’t we smoke a bowl first?”
“Yeah,” chimed in Steve, the light tech.
Rod paused. “Do you have any this time, or are you intending on begging from Klem’s stash again?”
“I have my own,” Cliff said, trying not to sound defensive, knowing Christine could hear. He didn’t want her to think he was a mooch. “And I don’t beg off of him. He’s just generous.”
“I have my own too,” said Greg, the sound engineer. “Got some sticky chronic from the weed store. God, I love Washington.”
Cliff gave Rod a pointed look and silently blessed the roadie.
They all settled on the bench seats and around the little kitchen table, but as Cliff loaded a bowl, taking as much time as possible, he forgot a vital fact: Kat didn’t smoke weed.
He froze with the lighter in his hand as she got up from the bench seat and headed to the partition door. “Kat, wait.”
She stopped and turned with a quizzical look. “What? I’m just grabbing my laptop.”
“I…um…” He scrambled for a distraction to keep her up front, but nothing came.
She shook her head and opened the door. Then gasped.
Cliff flinched.
“What are you doing back here?” Kat demanded.
“Cliff said I could tag along.” Christine’s voice was shaky and defensive. “You know, for my research paper.”
Klement bolted up from his seat looking furious. He met Kat in the doorway and glared in Christine’s direction. “God damn it, Chrissy!”
Chrissy? Cliff frowned. Did Klement know her already?
Klement rounded on Cliff, his eyes narrowed to slits. “Quinn is going to fucking kill you.” He closed his eyes and brushed his hand over his face as if the world were ending. “He’s going to kill all of us.”
Cliff blinked, confused. He’d only had two beers and no hit off the pipe yet. “What does Quinn have to do with Christine being on the road with us?”
Klement’s words came like a punch in the stomach. “She’s his baby sister.”