Why STRANGELAND irritated the crap out of me: A Movie Rant

Okay, I'll come out and admit that I'm twice as disappointed in this film because I'd had such high expectations. Dee Snider is awesomesauce. Even if you don't enjoy TWISTED SISTER (which I think is pretty good, but not among my favorites) One cannot help but applaud the way he takes on the U.S Senate and Tipper Gore regarding music censorship and comes out on top.

Seriously, watching this is a kajillion times better than the film.


To sum it up, Mr. Snider is an extremely intelligent guy. I'd expected an intelligent film. But alas, it was mostly infuriatingly stupid-ly unbelievable and sends messages that Snider himself argued against in real life.

Before I rant on the details, I'll quote a Summary from IMBd

" A schizophrenic sadist by the name of Captain Howdy lures teens through the internet into his painful traps. A detective starts pursuing him after he captures his daughter. Eventually they catch up with him and send him to a mental hospital. But upon his release, the townspeople don't accept the new, peaceful former Captain Howdy, and attack him. Howdy goes nuts again and in revenge starts everything all over, only worse. Can the detective stop him?..."

And I gotta admit, "Captain Howdy" which most people think is a nod to The Exorcist, but is really a 1984 Twisted Sister song about a child molester/murderer (But not in the film) is pretty damn terrifying. 1.) This movie makes pierced and tattooed people look like psychos.

Seriously, as the villain tortures the ever-loving shit out of his victims, he spends half the film declaring that his tats and piercings are his identity and make him superior to others.

The majority of the tattooed and pierced folks I know are the among the nicest I've met and it bugs the crap out of me that someone who argued vehemently that self-expression and being different doesn't make you a bad person gave the opposite impression in his film.

Why the hell couldn't he have been the hero and the bland-looking cop been the villain?

I've met many people whose tastes run that way and AGAIN, the majority are nicer, and better mannered people than most "vanillas" I've met. I sang karaoke with many and did I get kidnapped and tortured? No, we sang songs and I received an education on their culture. I was also treated with more respect than I was among other groups of friends. They wouldn't so much as shake my hand without permission and protected me from drunk pervs who tried to cop a feel.

A culture which is centered on RESPECT, MUTUAL CONSENT, and SAFETY!

The sadomasochistic villain kidnapped non-consenting victims and sewed their mouths shut before playing with them "so he could educate them and show them the glory of pain and pleasure." Hell, Pinhead and his cenobites were smarter than that. If he really wanted anyone to "understand" his lifestyle, he could have found many willing students on a fetish site ... or I dunno, that "metal" club that was full of kinksters? And they could have TALKED about each other's desires. ::Facepalm::

3.) Waaaay too many incidents that were incapable of suspension of belief.

a.) The hero, a cop whose daughter is one of the victims, doesn't know how to use a computer. The film took place in 1998. Cops knew how to use computers by then. He has to have his freakin' niece point out that maybe his daughter was missing because she met someone online. Then she had to teach him how to go into the chatroom and look up the guy's profile.

b.) After looking up the guy's profile, and pretending to be a teen in the chat room, the cop automatically pegs him as the kidnapper when invited to a party.

c.) Getting an invite to a party was enough to get a house stormed by cops without a warrant or anything.

d.) However the villain gave them the wrong address (They storm in on old people having sex and almost give them heart attacks which is funny). ...BUT when the cop finds the villain's REAL lair, he goes poking around on his own, which is stupid AND illegal.

e.)  Outside of the villain's house, the cop trips over a garbage bag full of surgical needles.

Tattooed and pierced people are very hygienic and would never dispose of their sharps that way. Hell, the villain was wearing gloves and being all sanitary with his victims, but he just tosses a bunch of bio-hazardous evidence in his backyard? What in the ever-loving fuck?

4.) The story ALMOST gets interesting, then takes a nosedive.

The villain gets busted, but since the only one of his victims died (and from a heart-attack, not from torture) he manages to get a verdict of "not guilty due to insanity" and gets out after only 4 years in a mental institution. He's "totally rehabilitated" and removed his piercings and covered his tats with makeup.

...Then he moves right back into his old house in his old neighborhood, where an angry mob protests outside.

2 cool parts about that.

a.) The protest sign that read "We're Not Gonna Take It" made me grin.

b.) Seeing THIS GUY in the mob. 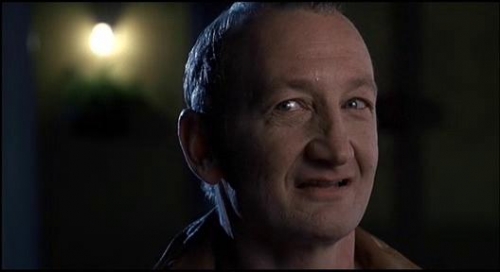 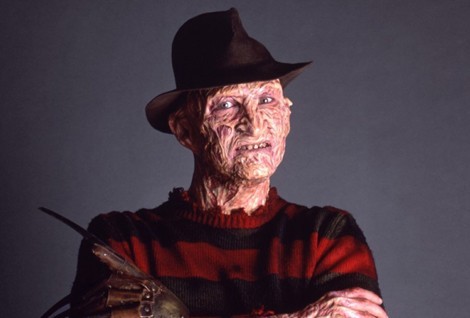 And in a most delightful cinematic twist, the guy who played Freddy Krueger, a character who was murdered by an angry mob, led an angry mob and lynched the villain.

...who ended up surviving because the tree limb broke after the crowd left.

And this is where the movie really went to shit. The rain washes off the villain's makeup and then in the next scene he's magically pierced up the wazoo again and goes back to torturing people. Though I admit the sight of "Freddy" being a victim was amusing.

Anyway, the villain and the cop have a big showdown (again, stupidly alone) and that's it.

What would have been much more interesting would be if Robert Englund's (Freddy) character was a murderer and Dee Snider's character ended up redeeming himself by helping bust the guy. I know that rips off Silence of The Lambs, but hell, this movie was already doing that in other ways anyway.

Now back to other things

5.) There's just something wrong about the guy who wrote the 1984 song "Street Justice" (Which is similar to the back-story of Freddy Krueger, but clearly advocate citizens taking matters into their own hands)  playing a sexual predator/ kidnapper/ murderer who goes on a vengeful rampage after being "wronged" by vigilante justice.


In conclusion, I must ask you, Dee Snider, why the hell did you, an intelligent man who's always stood up for heavy metal, self-expression and individualism and stood against rapists, pedophiles, murderers, and our crooked legal system make a film that was not only full of logical fallacies, but appeared to denigrate your alleged values?