Here's a list of some of my favorite Christmas movies. Most are well known, but a few are kinda obscure.

How The Grinch Stole Christmas

Who doesn't love hearing the tale of the little Whos of Whoville and how their loving nature made the grumpy Grinch's heart grow!

I don't care what anyone says, Gremlins is a Christmas movie. Gizmo is a present, there's snow and decorations, and the hero's girlfriend shares one of the worst holiday horror stories ever. There's even a tip of the hat to Charles Dickens in the Scrooge-esqe bank owner's character.

Also one of my favorite Halloween movies, this film manages to pull double duty. I love Zero's role as Rudolph when pulling Jack's sleigh.

A kid is accidentally left at home when his family takes a vacation to Paris. He has to fend off burglars and handle his fear of a creepy old dude in the neighborhood.

I think I love this movie so much because it came out when I was a kid and LOVED being home alone. I also enjoyed all of the booby traps and tricks he doled out to the bumbling burglars.

Santa Claus is Coming To Town

I think this film appeals the most to my inner writer. We get Santa Claus's back story. Where he came from, how he grew up, how he met Mrs. Claus, and how he became the jolly patron of presents. And the villain's name is "Burgermeister Meisterburger!!"

And if the previously mention film appealed to my inner writer, this one appeals to my inner romance writer. Like the Bride of Frankenstein, the children build a girlfriend for Frosty. ::sigh:: Unfortunately the parson refuses to marry them because he can only marry humans. Sounds familiar, huh? 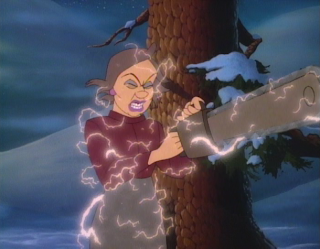 This made for TV low budget cartoon movie is freakin' weird, but oddly touching. A young woman gets a job as a housekeeper in an orphanage with a corrupt, evil manager. The children are so lonely they worship the tree in their yard. Eventually the kind housekeeper saves the day... and Christmas.

I know, no big surprise. Who doesn't love this movie? The 50's nostalgia, the leg lamp, the marauding neighbor dogs, and the eternally infamous line, "You'll shoot your eye out!"