FORSAKEN BY THE OTHERS by Jess Haines cover reveal & giveaway!


Okay, first off, I gotta tell you that I freakin' ADORE Jess Haines. Not only is she a fantastic urban fantasy author, but she also is THE BEST person to go to for off the wall movie recommendations. And she's a riot on twitter.

So I am beyond honored that I get to take part in the reveal of the cover for her upcoming release, FORSAKEN BY THE OTHERS. 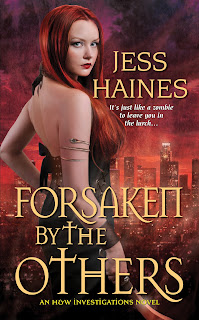 The Others--vampires, werewolves, things that go chomp in the night--don't just live in nightmares anymore. They've joined with he mortal world. And for private investigator Shiarra Waynest, that means mayhem...

Have a one night stand with a vampire, and you can end up paying for it for eternity. P.I. Shiarra Waynest, an expert on the Others, knows that better than most. Yet here she is, waking up beside charismatic vamp Alec Royce with an aching head...and neck. Luckily, Shia has the perfect excuse for getting out of town--namely, a couple of irate East Coast werewolf packs who'd like to turn her into a chew toy.

On Royce's suggestion, Shia temporarily relocates to Los Angeles. But something is rotten--literally--in the state of California, where local vampires are being attacked by zombies. Who could be powerful enough to control them--and reckless enough to target the immortal? Following the trail will lead Shia to a terrifying truth, and to an ancient enemy with a personal grudge...

Now it's giveaway time! One lucky commenter will win an ARC!

And for another chance to win, visit Jess's site here.