What if Print Books Die? 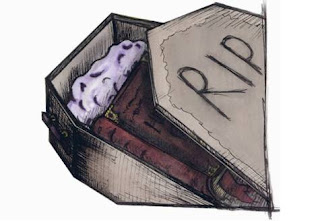 I still haven't read an e-book yet. I have no Kindle, Nook, or i-anything. I'm too poor. Which brings me to a concern, although it's probably far-fetched.
With e-books being the "wave of the future," what if print books die? Some people talk gleefully about it happening. But would that be such a good thing?
Let's picture this scenario for a moment. And please permit me to be extremely hypothetical. Let's say that there are no more new print books. You can still get them off e-bay and at antique stores.
Suppose that school textbooks are digital and an e-reader is on every kid's school supply list, which many people can't afford. Or, say the school provides the e-readers but taxes the hell out of the district to pay for them.
Prisoners won't be able to read anymore because I don't see the taxpayers paying for e-readers for them.
Retirees on a shoestring budget won't be able to afford them.
People in rural areas and third world countries (who already have a hard time getting print books) won't be able to download anything even if they could get an e-reader.
So, the bottom line, in my opinion would be that if print books go away, illiteracy would rise with poor people, prisoners, and people in undeveloped countries.
Your thoughts?
Posted by Brooklyn Ann at 12:27 PM