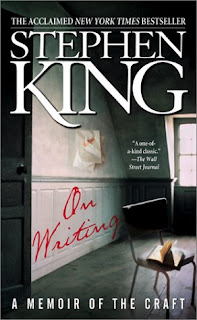 Besides a few strange people (in the case of my last book, I was one of them) many writers cringe when the spectre of editing looms over them. I think I've worked out a process that eases the anxiety and is sometimes a little fun. As in my last post, I have borrowed heavily from Stephen King's ON WRITING. Again I will say, BUY THAT BOOK! It is awesome.

1.) In my last post in the writing process I mentioned that one should put their first draft away for at least six weeks. It really works! Now, pull it out and read it all the way through. Try to do it in one sitting if you can. It should seem to be an exhilarating combination of new and familiar to you and hopefully you fall in love with it all over again. DON'T make any corrections yet. Just make notes. When finished reading it, put it away for at least a day, but keep it churning in your mind. Meditate on it.

2.) Now, with your notes and whatever new thoughts you have, proceed with your corrections, scene cuts, revisions, and additions. Try to accomplish this as fast as possible, keeping the story as a whole part fresh and vibrant in your mind.

3.)Remember those beta readers I mentioned? Now is the time to deliver the second draft to them. I sent mine to six: 2 fellow writers, 1 college English professor, 1 elementary school teacher, and 2 test audience people who read my genre.

Be sure to let them know what you want out of their critique (and you better be willing to critique their work in return!)From the professor and fellow writers I wanted corrections on grammar, sentence structure, character motivation, plot, and places to cut/add word count. From 2 ladies who live or lived in England, I wanted them to catch me if I used American phrases. From the test audience I wanted general info..What did they like, what did they hate, etc.
Be sure to give them a reasonable deadline, and don't hold your breath waiting for all to make it.

4.)While waiting to hear back on the critiques you can occupy yourself with critiquing other writer's projects, beginning your query letter and synopsis, and of course, beginning a new project. Do NOT pester your beta readers. A casual, "how's it going" reminder is okay if it is close to the deadline, but remember that you likely want to use their services for your next book, so don't be annoying.

5.)When you get your critiques back: Likely you will not get them all back at the same time. Feel free to read them as they come in and make notes, but don't open your manuscript and revise until you've heard back from at least three.

The easy part: See which comments and opinions are the same. If all three have issues with the same scene or character, the changes needed should be easy and obvious. I had a scene involving characters that hinted at another book, but they hijacked the scene and ruined it instead of tantalizing the reader. Armed with the feedback from my betas, it was an easy fix.

The hard part: Some things your betas will disagree on. What to do? Just remember that the tie goes to the writer. There was a chapter that one reader thought was unecessary, one loved it, and the other two didn't comment at all, which I took as okay. I liked the historical value of the chapter, so I decided to keep it.

When debating on whether to change something or not, always keep in mind: What is your story about? How do you want it to progress? Which suggestions fall in with that and which take it somewhere else? Another reader thought my main character got away with something too easily. She wanted me to add in more conflict. Since that scene was relevant for characterization and theme, but not a major plot issue, I did not want to slow the story down. But I compromised and added a paragraph that gave my character a close call.

6.)Using all the suggestions from your god-sent betas and the ideas they gave you, proceed writing the third draft. It should be easier than the second. If your readers had issues with the majority of the book, you may want to send them the entire third draft. But if you are lucky, you can send them only the makor scenes you revised along with comments such as "I changed this, or cut that." Be sure to thank them all profusely. I learned the hard way that without other readers, your book will suck.

7.)After you've heard back on your revisions, Go through the book one last time with a fine-toothed comb and polish.

Now you should have a sparkly wonderful book ready for the next test: Agents.
My next post will be about researching agents and the querying process.

Hope I helped and please comment on ideas and suggestions that I missed.
Posted by Brooklyn Ann at 12:01 PM