One of the most true things my ex said about me is that I have the organizational skills of a cement mixer. This is another reason why I saw a lot of 2017 as a failure. And though some of it was in that I never achieved a work-life balance, a regular schedule, a budget, or a marketing plan, I also missed what successes I had.

Like... OMG, I ACTUALLY MADE MY GOAL INCOME FROM MY BOOKS! It was just by average, not by month, like how I was seeing it. I literally missed the forest for the trees.

If I'd been keeping track all along, instead of counting it all up at the end of the year, I would have seen this.

With that in mind, I'm going to spend some time reflecting on past behaviors as I list each goal and sub-goal.

Another thing that really got me on the productivity thing was that this was my first year working exclusively from home. This gave me a "Kid in a candy store" complex with time. It also killed my motivation in a way I didn't expect.
See, the last few years were spent in a flurry of productivity and some semblance of organization because my mind kept up the mantra: "Gotta get out of this call center. Gotta Get out of this call center!"

...But now that I have another awesome day job that makes me twice the money in half the time, the urge for escape isn't at the forefront of my mind. I need to find something else to fixate on. Another carrot in front of my nose. I don't know what that is, but I hope to come up with something in the next month or two.

I also need to spend more time with my mentors and colleagues because the encouragement and advice of fellow authors has improved my career. I don't know what made me quit doing that.

Speaking of having more money, although I did get myself a nice emergency fund established (After years of living paycheck to paycheck, this is a relief) I am really sucking a budgeting and I made a ton of impulse buys... like that full-sized skeleton.

I will work hader at budgeting, and curbing impulse spending, but I will admit that all the crazy horror stuff I bought is still a good thing. For the first time in over a decade, I was able to indulge in some self expression. Now I just gotta budget that sort of thing in my life instead of being all, "Hooray! I have money! I'll buy stuff!"

Budgeting will also help me better figure out what sort of marketing I can and will do as well as start planning for my future.

And it will help me with goal 3.

I have assets. Now that I'm over the shock of that concept, I need to figure out what I want done with them when I die.

I noticed through my 2017 recap that I was sick a lot. This sucked even worse with not having insurance. Thanks to knowledge from a friend, I found out that with the ACA, you can go to an insurance agent who will help you get on the right plan and it doesn't cost you anything to get that help. I'm on an amazing plan because apparently Idaho's insurance market is great. I know that's not the case for all states though.

Anyway, I'm also beginning to take vitamins and I'm going to cut back on Red Bull and subsitute for smoothies, make a little bit of an effort to eat more fruits and veggies, and SEE THE DOCTOR!

I also managed to find my old therapist. I have PTSD and she was great. She'll be able to help me with some mental issues that hindered me.

On the mental health front, I'm going to make sure to schedule days off and to schedule something for pleasure each day.

On the physical health front, I'm going to trick myself into exercising more by scheduling a time to choose to clean something or do crunches and stretches.

#5.) Produce at least one Audiobook.

More people are reading audiobooks and my fellow authors and many readers have been telling me to get my books in audio format. But the time and expense has scared me. I'm determined to learn what it takes and get Wrenching Fate in audio. If it's easier, maybe I'll even get the whole Brides of Prophecy series out in audio. :)

Between my PTSD and my last local book signing being so demoralizing, I didn't try to do one last year. But I do have local readers and have gotten lifelong fans from these, so I need to suck it up and do another one. It can be practice for if I ever make the big time, lol.

These 4 books will be:

Two Hearts of Metal books.
These are in my contract and didn't give me a big enough gap for other projects.

1 Brides of Prophecy Book
Beau's book is next. I haven't written a M/M romance yet, so that should be interesting.

I have an idea that's been stewing. I don't want to say much about it, but a lot of thinking led me to the decision that I want my books to be more women-oriented, rather than hero-bait. Not that I'm going to stop striving to write awesome heroes, far from it. They'll have to be even more awesome to deserve the badass women I plan to write.

Yes, this means no Scandals With Bite book for 2018. That series sells the least and I feel dangerously close to a creative slump with it. I do want to revisit that world sometime though, so it's not quite the end. After all, The Lord of Blackpool still needs his happy ending. 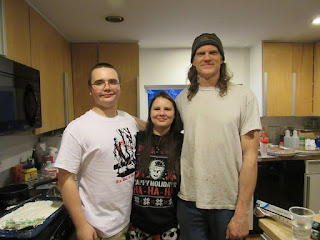 I am so freaking lucky to have my awesome son and a boyfriend that is too good to be real. My son is going to be leaving the nest in a couple years so I want to do the best I can to prepare him for adulthood and enjoy the time I have left with him.

As for my boyfriend, if you follow me online, you know I talk about him and his kindness and amazing exploits a lot. I'm still smitten. I seem to have done well with my 2017 goal of doing nice things for him because he's still with me and he still treats me sooooooo good.

So I'm still on a mission to keep him.

I also want to reach out to friends and family more.

#8: Get Little Beast on the road 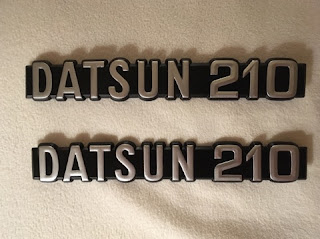 My Datsun restoration project fell through last year, though I did manage to get her a new hood and new side emblems. And man, I do miss working on cars. It's satisfying in a way I can't describe.

#9: Put Engine in my son's truck.
We were supposed to do that last year, but whatever. I'm making my son help too. He needs to learn how to work on cars.

#10: Learn how to airbrush flames.

I got an airbrush kit and I want to put flames on my Honda Fit and my Datsun, Damn it. I still have to paint the Fit purple too. This is my planned look for it. 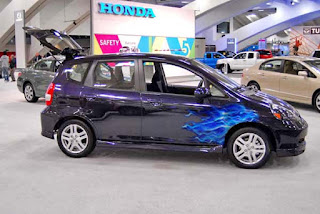