I'm delighted to present to you the cover for Unleashing Desire! 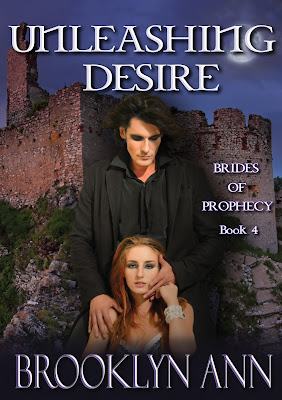 What do you think? I'm pleased with it because not only did I find a stock photo of a REAL ruined castle in Romania, but I also found stock with models that look exactly like the characters! Thanks so much, Grigoris Drakakis and Angel!

I'm very excited about this book. It's the much anticipated 4th volume in my Brides of Prophecy series.

A setup so perfect… it might just be fate.
Radu Nicolae has spent centuries in a guilt-induced hibernation beneath the ruins of his family castle. The only time he awakens is to feast on the occasional vampire hunter. When Lillian Holmes invades his lair, trying to kill him for a crime he did not commit, he decides it is time to rejoin the world. As he feeds on the inept, but delectable hunter and sees her memories, he realizes that he is being used as a weapon to murder her. Radu does not like being used.
Agent Lillian Holmes, of the Abnormal Investigation Unit, is sent on a mission to kill the vampire who murdered her father. But when she tries to stake Radu, he awakens. When his fangs sink into her throat, she thinks she’s a goner. To her surprise, she wakes up a prisoner. Furthermore, Radu did not kill her father. The AIU killed Joe Holmes and sent Lillian to Radu to die.
Together, they strike a bargain: Lillian will help Radu travel to the United States to reunite with his long lost twin brother. In return, he will help her take down the men who killed her father. As their relationship deepens on their journey, so does the danger. Not only must they keep government agents from finding out that Lillian is alive, but she also has a secret that will rock the foundations of the vampire world.

This book picks up on several loose threads from previous books. Radu Nicolae is the missing twin brother of the vampire, Razvan Nicolae.

As for the heroine, I hope her last name and job description rings a bell. Lillian is the daughter of Agent Joe Holmes, a scientist with the Abnormal Investigation Unit who experimented on Akasha in Wrenching Fate and escaped with Akasha's eggs and Silas's blood at the end of the book.

We'll find out what he did with those in this book.

Get ready for a wild ride!

Unleashing Desire is available for pre-order on Amazon.
And it will be up with the other etailers shortly. :D

I hope everyone's having a great week!