Early Hype For ONE BITE PER NIGHT!!! 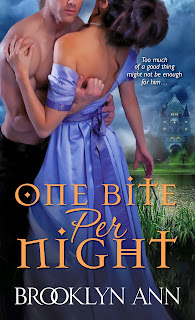 Due to all the delays and pitfalls with this book, I'd begun to fear that it would never get out to readers. Then, at last my glorious ARCs arrived in May.

Naturally, I then started fearing that everyone would hate it. That Publisher's Weekly would crucify it, that readers would revile it, or worse.... be bored.
A couple weeks ago, my 1st review appeared on Goodreads. The moment of reckoning was at hand. Then another came in. The first was FIVE STARS!! The second was four!
Then, last weekend Publisher's Weekly posted their view on my book. I was almost too scared to click on the link because they can be mean sometimes. (They were pretty nice to me with BITE ME, YOUR GRACE, though they threw in a bit of snark).
Publisher's Weekly LOVED IT!!!
They said, " Following her promising debut (Bite Me, Your Grace), Ann hits her stride with solid writing, a tasty dash of originality, and realistic relationships that zing with sexual energy. A strong sense of fun mixed with a little feminism keeps things lively and light, while the well-developed story keeps eyes on the page."

Squeeeee!!!!
Further excitement ensued when readers are already reaching out to me on twitter and facebook to rave about ONE BITE PER NIGHT.
And even better, my local bookstore enthusiastically welcomed me back for another signing (August 16th 1pm to 4pm at the Coeur d'Alene Hastings) and will help me make it even better than the first one.
So I am beyond thrilled that ONE BITE PER NIGHT is receiving positive reception and hope that its enthusiasm continues when hits the shelves August 5th.

For now, it's available for Pre-Order!