The Benefit of New Experience 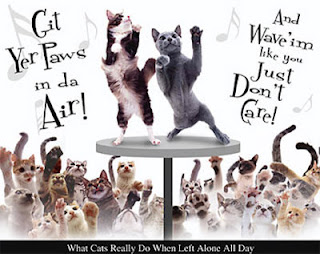 After a long hectic week I really just wanted to relax this weekend. Alas, that wasn't the case, hell, it never is. I had to abandon the kick-ass book I was reading and go to my friend's bachelorette party. Since we've been great friends since high school and I have few of those, there was no getting out of it. It wasn't the party itself that   evoked the most dread, it was the thought of the crowds. We were to go bar-hopping, which meant lots of unfamiliar crowds in unfamiliar places. ::cringe:: When I go out, I go to the same bar I've frequented for years to see the same drinking buddies.

But there was one thing I forgot: I am a happy drunk...and I had my friends with me. Sooo....

I had a blast!


We started out at the bar across from mine and so I actually got to see a lot of my regular blue collar friends. They were quite amused and overwhelmed with my company of 14 wild women and our phallic party favors. There was a phallic cake complete with cream filling. We stayed long enough for me to get in the party spirit before we took the shuttle to the other side of downtown. The clubs were like those I read about and saw on TV with several hundred people dry-humping to "unch-chi-unch-chi-unchi" music and crazy lights everywhere. The floors were movie theater sticky. I stayed on the fringes and watched while having an awesome conversation with the bride's aunt who is a screen writer. With the others I enjoyed a rare bout of female bonding.

After the 3rd overwhelming club we went to the lawn in front of the resort and there was some public urination for a few ladies while we covered their backs and some of us made a plan to go somewhere more mellow, preferably where we could smoke indoors. About 5 of us made it, while the others continued clubbing. The calmer, more familiar bar was the perfect place to wind down and I was able to meet some new people and have those interesting conversations where one is overcome with liquid courage and reveals their personal demons and dreams to perfect strangers. It's a writer's ultimate delight. By last call, the remainder of my original party had left, probably to retrieve the bride (who'd indulged in an obscene amount of tequila and likely needed to get home) And...somehow I made it home.

Besides zombie-esque exhaustion the next day and a few mystery bruises, I think I survived the evening with lots of fodder for my writing. Also, I learned a lesson. I think I may need to get out of my comfort zone once in awhile and embrace new experiences more often. Oh, and 14 drunk women unleashed on the town is a formidable force indeed. We were unstoppable.
Posted by Brooklyn Ann at 11:37 AM