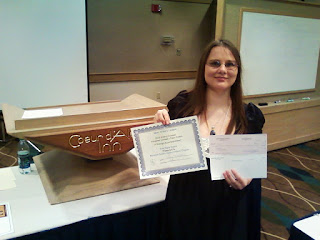 I was 'sposed to write this yesterday, but my WIP was calling. Ah, well.
Despite having only 4 hours of sleep, I rolled out of bed an hour earlier than I was 'sposed to because my husband wouldn't quit snoring. I arrived at the Coeur d'Alene Inn trying not to rub my tired eyes and smear my makeup. I hoped I didn't sound like a zombie when I greeted people.

The first speaker up was Asa Bradley There's supposed to be a nifty circle thingie above the "A" but I couldn't figure it out. Anyway, Asa explained websites, domain names, blogs, and other necessities for an author to make their mark on the web. Despite my exhaustion, I learned a ton.

Then, Pat Adair of the independent publisher, "Living Oracles" was up to talk about the future of publishing. A lot of the talk was about technology. i.e. links embedded in e-books and 3D TVs and online book printing devised right in the bookstore. It was fascinating and scary.

Then Kitty Fleischman, editor of Idaho Magazine explained what they were looking for and how to submit. That woman was energetic and hilarious. I may have a few ideas to submit to her.

Then it was lunch and more awards were announced. I am pleased to tell you all that my novel, BITE ME, YOUR GRACE received an honorable mention, despite that my entry was only the first chapter, which was the one that my agent and I did the most work on. Two awards in two days. I am thrilled!

After lunch we had a real treat. David Givens, author of The Nonverbal Dictionary, which is used by FBI and Law enforcement all over the country, shared some basics about body language that will benefit every writer. His book is free on the web and I recommend that you check it out!

The final workshop was a marketing panel composed of self published authors, marketing gurus and independent publishers. People later told me that my questions and comments were interesting, but by then  I was so tired that I couldn't remember what I said. There was a banquet later, but I couldn't make it. I went home and curled up with a book.

The next day I went to grandma's tree farm to help split and stack firewood. I'm still sore.
Posted by Brooklyn Ann at 10:31 AM