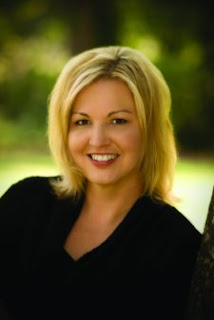 I am beyond thrilled to announce that one of my new favorite authors has agreed to appear today and do a guest post! Without further ado, I present, Elisabeth Naughton!

Thanks so much to Brooklyn Ann for inviting me to guest post today! For those of you who don’t already know me, I write dark paranormal novels deeply rooted in Greek mythology. The second book in my Eternal Guardians series – ENTWINED - just released last month. If you’re a paranormal fan, ENTWINED has got it all - seething demons, conniving gods, betrayal, heartbreak, magick and a wicked hot love story.

I absolutely love writing the Eternal Guardians series because there are so many threads from which to build. The first book in the series – MARKED (May 2010) – grew from a spark. I knew I wanted to write something about Greek mythology. I knew I wanted it to be dark and sexy. And I knew I wanted this big warrior dude to have to find a woman who didn’t know she was linked to a world she never thought existed, fall for her but be trapped because he knew by finding her, he was sealing her death. When I started writing MARKED, that’s about as much as I knew. But the story grew from those minute threads and from there blossomed into an entire series.
For me, the key to writing an ongoing series is developing the secondary characters enough in each book so that readers are eager to read their stories. One reviewer who recently read ENTWINED said, “…the building of the secondary stories has me itching for the next book.” In my opinion, the secondary characters and their struggles have to be as enticing as the main story, because when the main story is done, those secondary struggles and characters are the gems that will bring readers back for more.
I admit to not being a highly organized writer. I don’t plot out every moment ahead of time. Generally, I know the basic turning points of a book when I sit down to write it, but the secondary characters grow and develop as the main story is unfolding. Take Orpheus, for example. He’s a secondary character who pops up in MARKED. He lives in Argolea, his brother Gryphon is an Argonaut, he was passed over by the gods to serve with the Argonauts even though he’s just as big and strong as they are and he’s linked to the ancient hero Perseus, just like his brother. But he’s got a secret. One deadly wicked secret that, if anyone knew, they’d kill him for. When I wrote MARKED, I had no idea just how Orpheus fit into the world. Who is he, really? Because I didn’t know much about him (other than what I listed above), I thought he might fade into the background as the books went on. But no, he’s grown and changed and become as integral to my world as the Argonauts are. His story begins in MARKED, unfolds a touch in ENTWINED, and explodes in TEMPTED (book 3, release date TBA). He’s not an Argonaut. He’s a secondary character. But because his transformation has become so important, guess who’ll be getting book 4? You guessed it: Orpheus.
I love when readers write to tell me they can’t wait to read so-and-so’s book. With the release of ENTWINED I get daily emails asking, “Who’s next? Who is Isadora’s hero? What about Demetrius? What about Orpheus? What about…(fill in the blank)?” As a writer, these are questions I ask myself all the time (and my poor critique partner who listens to me ramble about this series on a daily basis). So it’s very cool to know that readers are as invested in my world as I am.
Do I know where this series will ultimately end? Not entirely. I have a vision of what the very end looks like. But I don’t know the specific steps along the way. Unearthing those story gems is what I love most about writing this series. And as long as they’re there to unearth, I’ll continue writing them.
How about you? Are you a fan of ongoing series? What is it about a series that makes you salivate for the next book? I’ve got books to give away today! Let’s pick two winners from the comments. Your choice of either MARKED or ENTWINED.
Happy ! 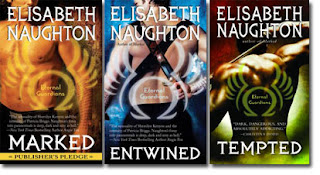 ***
A previous junior-high science teacher, Elisabeth Naughton now writes sexy romantic adventure and paranormal novels full time from her home in western where she lives with her husband and three children. Her debut release, Stolen Fury, heralded by Publisher’s Weekly as “A rock-solid debut,” was a 2010 double RITA® nominee by Romance Writers of America in the Best First Book category and the Best Romantic Suspense category. When not writing, Elisabeth can be found running, hanging out at the ball park or dreaming up new and exciting adventures. Visit the author’s website at www.elisabethnaughton.com
Thanks so much for appearing, Elisabeth! Contest winners will be drawn on Wednesday, however, of you don't win, check out this tidbit of news I got direct from Ms. Naughton herself: "As for MARKED...do you have an ereader? If so you can download it free from
B&N right now and next week (starting on the 15th) Amazon is making it free
for the Kindle through the end of the month."