One Bite Per Night is on sale until July 3rd! 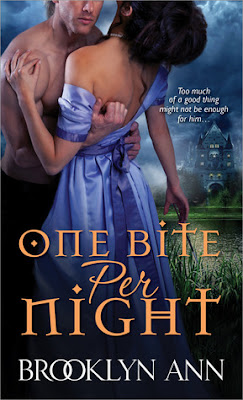 My publisher has my 2nd Scandals with Bite novel, ONE BITE PER NIGHT on sale for $1.99. It's a regency vampire romance where I have a lot of fun playing with the guardian/ward trope.

You can get it on:
Amazon
Nook
Kobo
Or Google Play
Here's the Blurb:
He wanted her off his hands...
Vincent Tremayne, the reclusive "Devil Earl," has been manipulated into taking rambunctious Lydia Price as his ward. As Lord Vampire of Cornwall, Vincent has better things to do than bring out an unruly debutante.
Now he'll do anything to hold on forever
American-born Lydia Price doesn't care for the stuffy strictures of the ton, and is unimpressed with her foppish suitors. She dreams of studying with the talented but scandalous British portrait painter, Sir Thomas Lawrence. But just when it seems her dreams will come true, Lydia is plunged into Vincent's dark world and finds herself caught between the life she's known and a future she never could have imagined.
Still need more convincing? Check out this hilarious review:
Donna C on Lit Bites wrote:


"While my taste for sexy times in books is growing, the more traditional bodice rippers have really never done it for me. I like historical fiction and I like sex but that particular time period just isn’t my forte. Worlds of the ancients, yes. Regency era propriety? No. I’m not big on the traditional romance coming out of that time either, like Austen or the Bronte sisters so really, no surprise. It’s all a yawnfest for me, despite the sex.

Until Laura found a hidden gem on NetGalley that I was in no position to deny. Regency-era bodice ripper. WITH VAMPIRES. Yes. Immediately, yes. Because vampires make ANYTHING better. The sexytimes escalate, the bodices get even more ripped. NOTHING BAD COULD COME OF THIS. I knew it in my heart of hearts.

Now this is my first Regency-era bodice ripper. I have nothing to compare it to. But I know my writings and I know my plots and I know what works for me and what doesn’t so lets go from there, shall we?

The second the book started I was reading it with an accent in my head that kind of sounded like Shelby Foote, well to-do person from the upper echelons of the south that have a more cultured drawl about them. That was the tone of the book for me. And it fit oh so well. The over the top level of propriety and gasp and SCANDAL was just ungodly amusing to me as I sat there reading it, squealing in delight at the moments of SHAME and FLUTTER and QUIVERING THIGHS. Clutch the pearls, ladies. It’s wonderful.

It was very much over the top in terms of writing style but it fit. The story was over the top, the situation was over the top, the gasping and lack of propriety was over the top but you know what? I couldn’t get over the top enough. The sexual tension between Lydia and Vincent was extravagant and I just wanted to scream DO IT ALREADY. I’m imagining this is indicative of writing within the confines of this era because that tension was drawn OUT until no one involved, including this reader, could take it anymore. FINALLY it happened and oh steamy thigh quivering it was phenomenal.

Although I have to say when I think of things springing out I think of maybe a Jack in the Box or snakes in a can. Not an erection. When those start springing out I start thinking boi-oi-oi-oi-oi-oi-ing and then the mood is momentarily ruined. There were a couple of other instances were body parts were getting a little too technically described and it kind of ebbed the hotness of the situation but certainly not enough for me to stop reading. Never that.

I was engrossed in the scandal of the familially spurned Lydia, rejected pariah of the Morley family getting shunted on this Devil Earl and becoming a pawn in a competitive game of marriage. I was hooked by Vincent’s rather emo-Louis plight of being a vampire and the night world he lived in with Angelica and Ian, two rather incredibly awesome vampires that I need to read more about in book one of this series immediately. I wanted more sneakiness from some of the characters that would otherwise prove to be as straight-laced as they come. Oh the surprises!

I do wish there was a bit more focus on the vampire actions, though. That seems to be very much skirted over and left to the imagination. I don’t necessarily mind in this instance because I was so incredibly entertained otherwise but I usually like to see more vampireness where vampires are concerned. Although Vincent’s vampire powers were used quite often when he needed them.

I have found a new love in ONE BITE PER NIGHT and Brooklyn Ann’s work. I can’t wait to get my greedy little hands on more of it.
4 1/2"