I'd say the popular yearbook quote from the 70's is fitting for this: WHAT A LONG, STRANGE TRIP IT'S BEEN.
I went to The Novel Experience Book Convention last week. I planned on bringing my boyfriend to act as my assistant since he used to Live in Vegas and could act as my sherpa through that crazy city. He also has much experience with trade shows and similar events and boy did that pay off.
The adventure began far before Vegas, though. Because I couldn't afford two plane tickets, we decided to drive. Alas, the car we'd planned on taking had a computer issue that would cost big bucks to fix and he can't fit in my tiny car so we resorted to taking his 1963 Ford Falcon convertible. We would stop in Reno for the night to visit his dad who scheduled an appointment to get some dearly needed front work done on the car.


We took the scenic tour down highway '95 and it was gorgeous. However, between high winds, rain, and treacherous steep grades and passes, it was also kinda scary.
But we saw some beautiful sights:

We also passed through an area near Hell's Canyon with all these houses on giant hilltops, but I didn't get a picture. :(

Night fell by the time we left the Idaho border and dipped down into Oregon. By then, freezing cold wind was blowing INSIDE the car due to a leak in the firewall. His heater didn't work very well so by the time we got to Reno we were wrapped in blankets with teeth chattering.
His dad greeted us at 3AM and ordered us to go to bed.
In the morning his dad (a kind, brilliant, and amazing guy) took us out for breakfast and then took us on a tour of his wife's antique store. My sweetie ended up buying me this amazing vintage jacket that went PERFECT with a dress I had for the VIP signing.

I was also shocked to discover that Nevada didn't look like the landscape from the Roadrunner cartoons.
Then we got the sad news that the car would take a few days to be fixed. But then his dad decided to loan us his car to take to Vegas.
That was a much smoother, warmer trip. I got to see all sorts of crazy sights, starting with giant military bunkers and fields of buried missiles. Then there was this creepy lake that looked prehistoric. And then there was the infamous Clown Motel... that overlooks a $@%@ cemetery. Can we get any creepier? 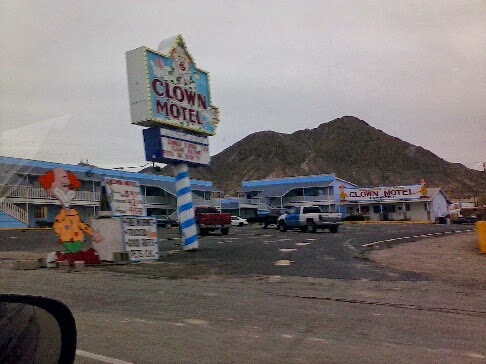 Then we passed some brothels and area 51 before it got dark just in time for me to see the lights of Vegas on the horizon.

(To be continued) PART TWO and PART THREE
Posted by Brooklyn Ann at 7:28 PM