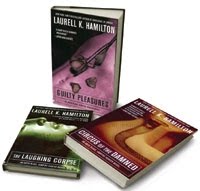 Yesterday I got together with my writer buddies, Bonnie R. Paulson and Shelley Martin. With them I discovered what's been holding me back on my latest project. Since it's a series, I've been having trouble figuring out how and when to work in details from previous books...and just how much information to fit in. More on this later.

A Stand-Alone Series is one in which you could read the books in any order without missing anything. They can feature different characters like Judith McNaught's regency novels, or follow the same character on different adventures, Like Nancy Drew. How that girl stayed he same age from the 70's on, I'd like to know. :)

A Sequential Series is one in which it's best to read the books in order so you can follow a continuing story line. They may feature different characters, like the Dark Hunters or the Black Dagger Brotherhood novels, or the same character, like the Anita Blake Vampire Hunter series.

But though there's a continuing story in the series, each novel, especially in romance, has stand-alone features, like a love story.

This is what I'm going for in mine. Today's mission will be to cut a little more back story that I believe unnecessary to the plot of this novel.

Oh, and contrary to what my progress bar for THE QUEEN OF PROPHECY says, I have been getting stuff done with it. I've just been cutting as much as I've been writing. :) See my post on this Monster Project for more explanation.

For those writing a series, which type are you working on? What problems are you attacking and what solutions have you found?
Posted by Brooklyn Ann at 11:35 AM