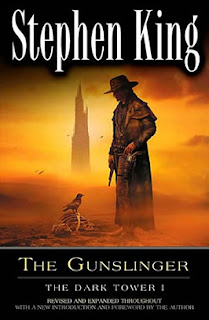 For years I have been working on and off on a series that breaks so many genre rules that it isn't even funny. In the first book, most of the characters are between ages 17 and 19, which apparently is a no-no for adult romance, but I can't make it YA because they are older in subsequent books. So far I'm gonna call it an urban fantasy, though I don't know how well that'll end up working because eventually the series really begins to lean towards straight fantasy. Either way, there is a love story within every one.

This got me to thinking of other authors that broke the genre rules and made new genres. Laurell K. Hamilton, Lillith Saint Crow, and others pioneered Urban Fantasy. Amanda Ashley, Maggie Shayne, and more started paranormal romance.

Right now I'm reading Stephen King's Dark Tower series, and damn does it break a lot of rules. I love that it is similar to mine in that it blends urban fantasy with straight fantasy. Not only that, but the fourth novel, WIZARD AND GLASS, completely interrupts the storyline and is all back story. (I have mixed feelings about that one.) All over the place are connections to his other books, as if every story he wrote is part of an interlinked web.

Once you ignore that King is labelled a horror author, it is hard to nail down the genres of some of his stories. The Shawshank Redemption and The Body, to name a few are literary fiction, in my opinion. Really, where would The Dark Tower novels fit if they weren't written by a horror author? Fantasy? Urban Fantasy? Science Fiction? Is it a dystopian? How the hell would one query such an oddball series?

I await your thoughts.
Posted by Brooklyn Ann at 8:57 AM