Why IT is my Favorite book: (Reposted In Honor of Stephen King's Birthday)

In honor of Stephen King's birthday, I'm reposting this blog post on why IT is my favorite book. 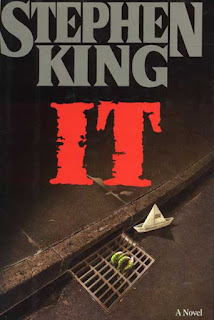 I am reading IT by Stephen King for the 11th time. Yes, you heard me right. Even though it's not a romance, it is my favorite book. Every time my friends and family see me curled up yet again with the 1138 page tome they shake their heads and ask, "Why do you love that book so much?""Because it's awesome!" I'd reply.Now, I've really been thinking about it. Why do I love IT so much? And how can identifying these reasons help me become a better writer?I'm finally getting a few answers.A.) The characters were all outcasts but they became close friends: The Loser's Club. At first I I loved IT because I had little to no friends as a kid, so these characters became my friends. They're still my friends.Now looking at it with a writer's eye I see that I want my readers to become friends with my characters. Every member of The Loser's Club has a flaw and a virtue, but most importantly, they all have something the reader can identify with.B.) The setting (1958 Derry, Maine) is so detailed that it's like a character itself. I feel like I go back in time as I visit the landmarks: The creepy run-down house on Neibolt Street where IT takes the form of a leprous hobo, the Derry Standpipe where poor Stan sees the drowned corpses of little boys, the charred remains of the old Derry Ironworks that exploded during an Easter Egg hunt in the 20's, and the Barrens, where the Losers build a club house to hide from the bullies.As a writer, I want my landmarks to become that real to the reader.C.) The antagonists. IT is scary enough in itself: a monster that takes the form of whatever you fear and kills little kids. YIKES!!! But that's not all IT is. As you read, it gets deeper and deeper. Then there's the bullies that are determined to make the Losers suffer. Everyone had a bully. I bet even my bullies had bullies.If I can create villains this compelling and frightening, ::sigh:: if I can do that...D.) The trials and triumphs of the characters. Your heart alternately bleeds and rejoices for the Losers throughout their story.I love my characters. So much so that I sometimes don't make them suffer enough. This book reminds me of that.What is your favorite book, and why? What can it teach you to make your work better?
Posted by Brooklyn Ann at 12:06 PM