Review of SUGAR AND SIN by Stella and Audra Price 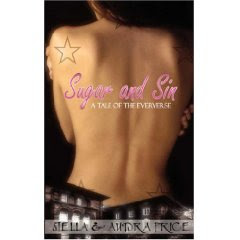 Sugar and Sin is the first novel in the “Eververse” series. It follows the love stories of, mainly, four characters. There is Astrid, a really hot witch from France and Fallon, a teleport demon. Then there is a side romance between Fallon’s best friend, Feyd, a telepathic demon, and Ashlyn, a lower level fire-demon. The reader is also granted a tantalizing glimpse of many side characters, subplots and further stories to come.

The beginning of the book was hard to follow, but as I gradually got to know the characters and the various subplots, I became hooked. I compare it to watching a TV show in the middle of the series and becoming addicted, despite missing out on some information. The “Eververse” series will quickly become a guilty pleasure.
Warning: This series has a lot of hard-core sex in it. If you prefer less graphic love scenes, then I wouldn’t recommend it. For those that like books that get down and dirty, I have three words: Hot. Hot, HOT!

Another disclaimer: There is quite a bit of infidelity in this book, but it is consensual infidelity, so I have mixed feelings. On one hand, I prefer faithful men, but on the other, it is a gratifying fantasy to be able to “play” with other hot guys and I appreciate the authors allowed their female characters to have fun on the side as well. If only the men cheated while the ladies sat docile at home, I would’ve quit reading.

SUGAR AND SIN also ends with a cliffhanger ending and despite its disjointed and confusing beginning, I am eager to read more of this series that goes places that few dare to venture.

Stay tuned, for soon I get to interview a character from the Eververse series: Archady Morrison. He's an incubus, so we know it'll be fun!

Here's the purchase link for SUGAR AND SIN: